AN OVERVIEW OF THE FIRST MONTH OF FALL

September is the ninth month of the year in both the Julian and Gregorian calendars. It is the third of four months to have a length of 30 days, and the fourth of five months to have a length of less than 31 days. In the Northern Hemisphere September is the seasonal equivalent of March in the Southern Hemisphere. 1st of September is considered as the beginning of the meteorological autumn in the Northern hemisphere, as well as the beginning of the meteorological spring in the Southern hemisphere. September means also the beginning of the ecclesiastical year in the Eastern Orthodox Church. It is the start month of the academic year in many countries and back-to-school month after summer break for children.

September (from language of Latin “septem” means “seven”) was originally the seventh of ten months on the oldest known Roman calendar, while March was the first month of the year until around 153 BC. After the calendar reform January and February added to the beginning of the year, September became the ninth month, but its name didn't change. And it had 29 days until the Julian reform, which added a day to this month.

In many regions of United States, the landscape has the soft colors of red, yellow and orange. The leaves begin to drop off the trees, kids are jumping into leaf piles and raking them. Fall, coming with the lead of September, also brings some wonderful holidays including Halloween and Thanksgiving which carry us through the season until temperatures begin to drop, nights begin to get longer. And then don’t forget about the end of Daylight-Saving Time when you setting your clocks back one hour and regaining an hour of sleep.

Plants and trees are slowing down, as sunlight decreases in September. Grape harvest season begins, football season is warming up. It is also the beginning of wearing thin sweaters on your t-shirts (but your shorts can remain.) September is also the month of migrate of birds and butterflies on the path of Sun. To enjoy the nature, it is an excellent time for trekking and hiking. In order to create free time for this full of fresh air activities, use a September 2023 calendar printable and plan your free times and note them on your blank September 2023 calendar.

September is the time for children to return to school. Although it is a great month for the coast, life gradually begins to be sustained in the cities. This means too much preparation, planning and adaptation. Summer dream is over, the realities and responsibilities of city life have begun. Wardrobes begin to be revised, children's schooling needs to be purchased, and repairs are made before cold weather arrives at home. You need a free printable calendar to plan all of these things properly. In the meantime, you know that in September, you can still go swimming, on picnics, so do not forget to include open-air events in your Excel, PDF, Word, JPEG printable calendar. Holiday destinations are becoming more attractive because the overwhelming warms are light and the crowd is dispersed. You should definitely make a September holiday, even if it is short. Therefore, do not forget to plan the month earlier using your very effective September 2023 calendar template, take a break from responsibilities and enjoy September!

Now let's take a closer look at the first month of fall season!

SEPTEMBER HOLIDAYS IN THE UNITED STATES

Labor Day is a public holiday in the United States celebrated on the first Monday in September every year and recognized as a federal holiday. This major day honors the American labor movement and the contributions that workers have made to the strength, prosperity, future and development of the country.

When the trade union and labor movements grew in the beginning of the late 19th century, trade unionists offered a special day recognizing to celebrate the labor.

Labor Day points also the unofficial end of summer season. Most of the people take their two-week end-of-season vacations during the two weeks ending Labor Day weekend. It means a last break before all of the busy fall activities, such as school and sports which begins in this time.

In the United States, many school districts resume classes around the Labor Day holiday weekend. Many begin the week before, making Labor Day weekend the first three-day weekend of the school calendar, while others return the Tuesday following Labor Day, allows families a final getaway before the school year begins. And many districts across the Midwest prefer to begin school after Labor Day.

If you want to attend the celebrations or use the chance of last getaway before the life is getting busier, plan this day by using September 2023 calendar with holidays before it comes.

SEPTEMBER EVENTS IN THE UNITED STATES

The United States president may declare a proclamation calling on government officials within the nation to display the country's flag on government buildings on this day. President also invites the people to observe this event in schools, churches, or other suitable places, with appropriate ceremonies. Various civil and educational authorities and individuals throughout the United States honor Constitution Day and Citizenship Day through various events and activities each year.

The Center for Civil Education provides lesson topics on Constitution Day and Citizenship Day for students at different levels. The US Department of Education provides various resources on the event as the department is responsible for implementing Constitution Day legislated mandates. One of those resources the requirement for educational institutions that receive federal funds to hold an educational program on the United States Constitution on September 17 each year.

This year will be the 232nd anniversary of Constitution of the United States.  If you want to join the observations and celebrations, do not forget to put a mark on your September 2023 calendar template for September 17th.

Each year the International Day of Peace is celebrated around the world on 21 September. The General Assembly declared this day as a day to strengthen the ideals of peace, both within and among all nations and peoples. The United Nations Member States adopted the 17 Sustainable Development Goals in 2015. The idea behind this adoption is to understand that it cannot be possible to build a peaceful world without achieving economic and social development for all people everywhere and to be ensure that their rights are protected.

Established and declared in 1981 by unanimous United Nations resolution, Peace Day presents a global date for all humanity to commit to Peace above all differences and to contribute to building a Culture of Peace.

If you commit to peace above all differences and give a hand for building Culture of Peace, Peace Day is a wonderful way to spread this idea. So you can mark this day on your printable calendar and talk more about the peace.

The word comes from the Latin aequus, meaning “equal” and nox, meaning “night.”

During the Fall equinox, the Sun crosses the “celestial equator.” Imagine a line that marks the equator on Earth extending up into the sky above the equator from north to south. Earth’s two hemispheres receive the Sun’s rays about equally. The Sun is overhead at noon, and as you can see it from the equator, the amount of nighttime and daytime are almost equal to each other.

After the autumnal equinox, the nights get longer and the days get shorter until the December solstice near Christmas.

Here are some of the major September events in history and you may take a look at them before you filled out your own blank September 2023 calendar with events that are important to you?

September 17, 1976 - The first Space Shuttle, The Enterprise, is presented by NASA.

September 7, 1998 - Google, the search engine company, is founded by Larry Page and Sergey Brin while they were Ph.D. students at Stanford University in California. 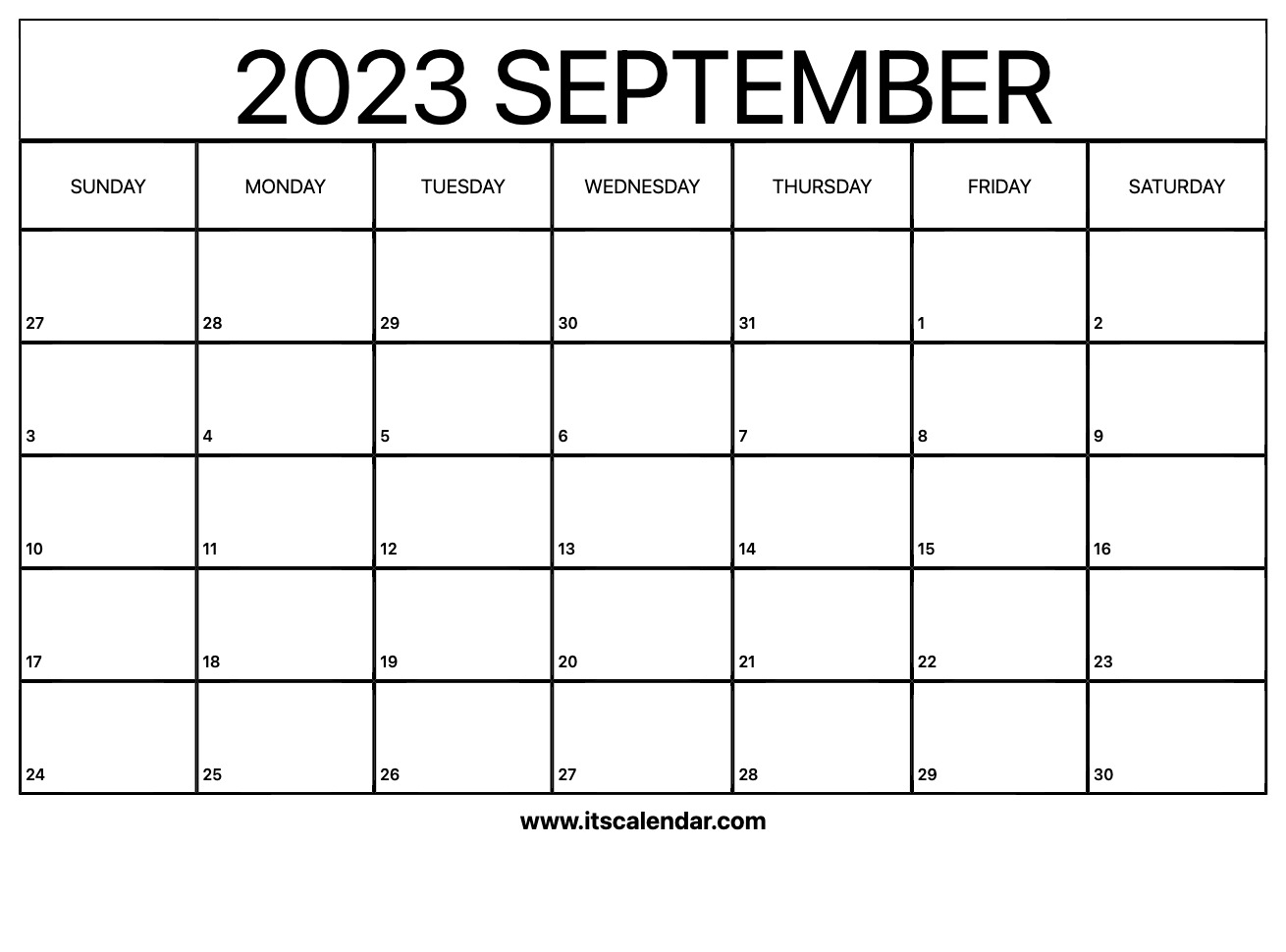 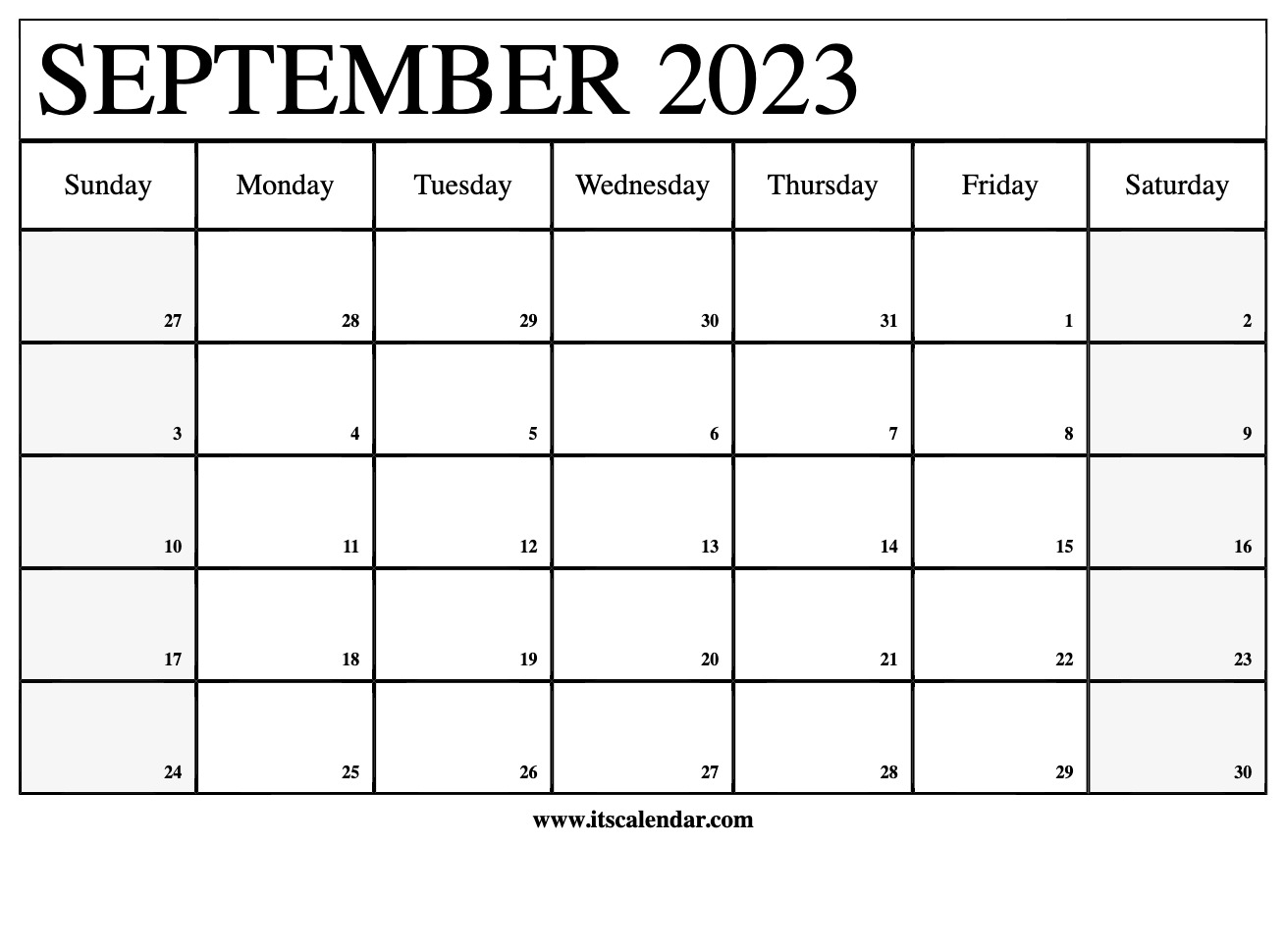 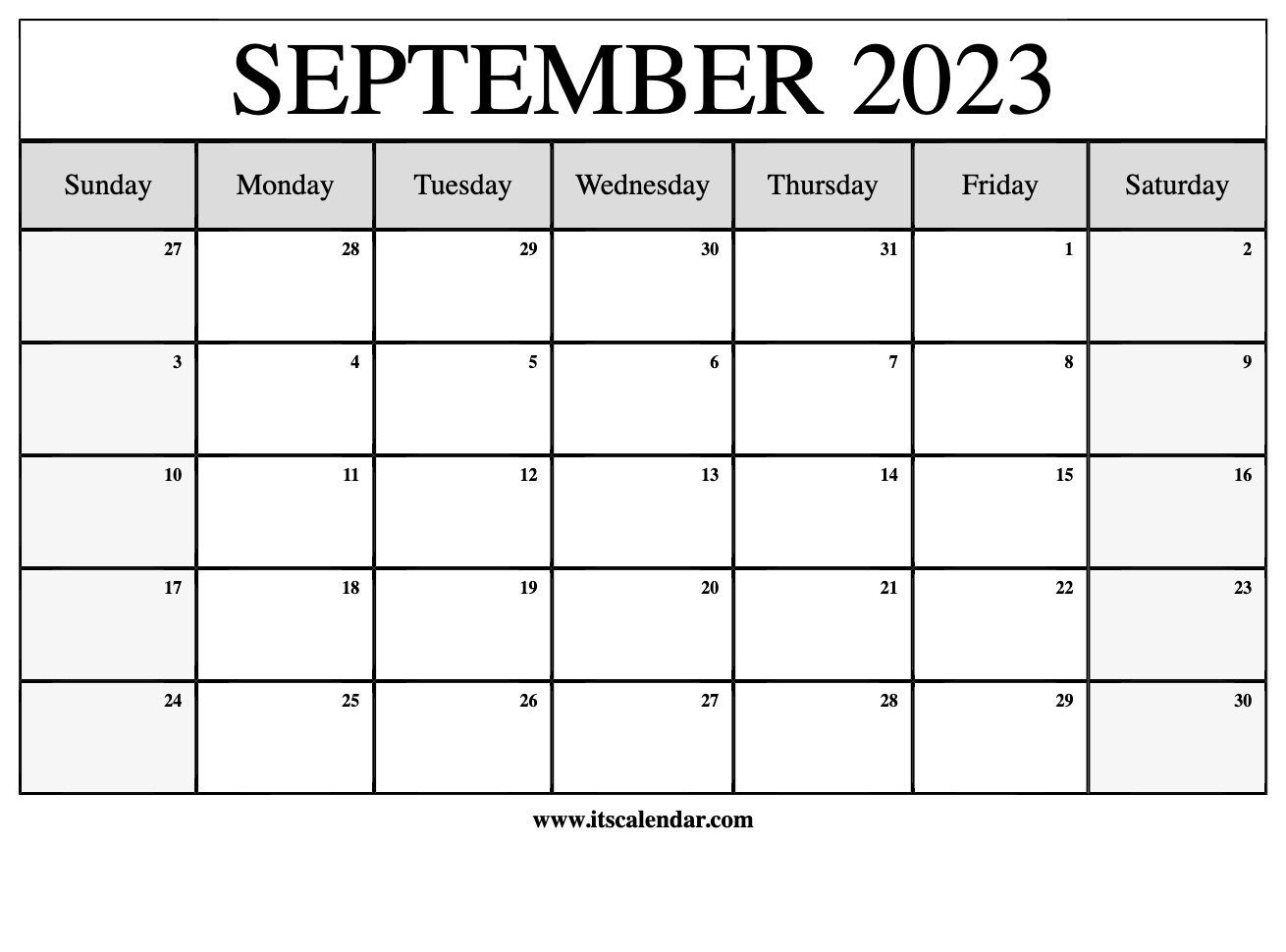 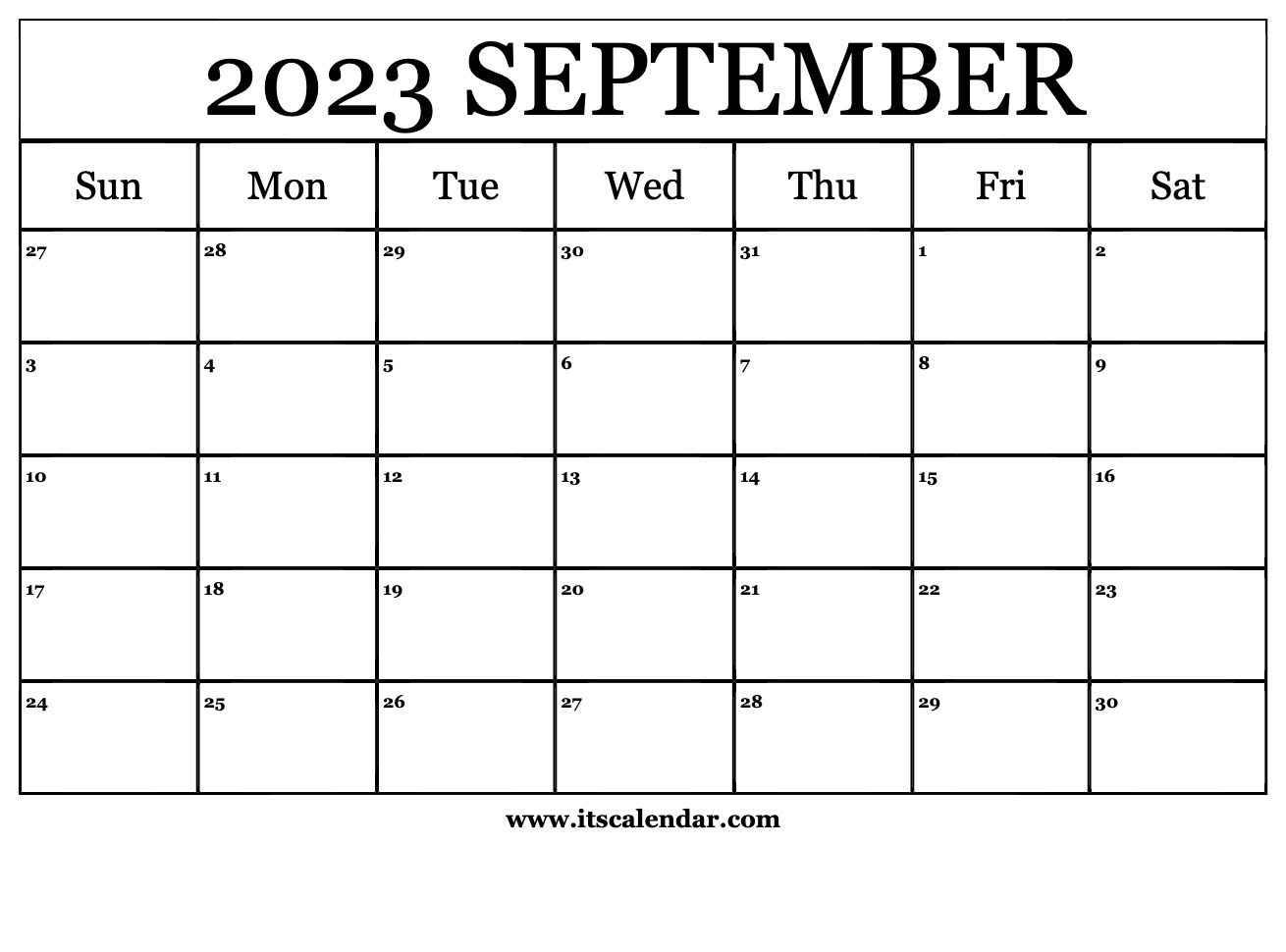