AN OVERVIEW OF THE NATURE AWAKENING MONTH

The month of April was the second month of the first Roman calendar, before the Ianuarius and Februarius months were added to the calendar by King Numa Pompilius in 700 BC. After that date, April was the fourth month of the calendar. In all years, April and July start on the same days of the week. This includes January when the month of February is 29 days. However, April and December end each year on the same day of the week.

For many people, April is one of the most beautiful months of the year. The air temperature does not cool or sweat. The heaters become less hot, the windows start to open. Especially for those who live close to nature, there is a very attractive weather outside in April. Every breath of our nose smells of the fragrance of flowers. The swallows come, the swans come, the bugs come alive, the bees come alive, the nightingales are blooming and flowers bloom. Winter cold is finished, nature has begun to revive. In nature scenery, green trees and colorful flowers are seen instead of snow white. The seas are also warmer and bluer. Because diversity begins in the sea, life begins again.

It is a great month to start doing sports in order to be more fit, since it is close to the start of summer and sea season. In winter we mostly stay in our houses, but in April festivals and street activities start. We are getting busier. All you need to make a perfect planning for yourself in this mobility to have a blank calendar. If you get an April 2023 calendar template, you can manage all of your activities in one page. You can fill the days with workouts, with events and with special days to remember with a blank April 2023 calendar. It is also so easy to plan your weekends and April vacations with an April 2023 calendar with holidays.

If you usually lost yourself while planning your week and month, you may use a Word, Excel, PDF, JPEG printable calendar to see everything clearer. If you download an April 2023 calendar printable, there will be no need to worry about the missing anything important!

Now let's take a closer look at this wonderful month of the spring season.

APRIL EVENTS IN THE UNITED STATES

Easter is a large religious Christian festival celebrated every year. Each country has its own Easter traditions. In America, men and women have traditions to make Easter parades with special costumes. The leader of the parade holds an Easter candle or a cross. For American children, playing Easter games like Easter egg roll and egg hunting is a lot of fun. A special meal for Easter in the United States is ham, potatoes and vegetables. One of the most requested recipes is hot cross buns.

Painting Easter eggs and making Easter egg hunting games for kids is what most American parents do during Easter week. The Easter Bunny is another traditional element and symbol of Easter.

According to some sources, decorating eggs for Easter is a tradition dating back to at least the 13th century. According to one of the explanations of this tradition, the eggs were formerly a forbidden food in the Lenten season, so that people paint and decorate them to mark the end of the fasting period, and then eat them as a celebration at Easter.

In the United States, the White House Easter Egg Roll, a race in which children are pushing hard-boiled eggs on the lawn of the White House, is an annual event on Easter Monday. The first official White House egg roll took place in 1878 when Rutherford B. Hayes became president.

Although Easter Monday is not a public holiday, businesses and schools may be closed because it falls on the same date as Confederate Memorial Day in 2023, which is a public holiday in Alabama.

We are sure that you are ready to anticipate the celebrations but we are just telling you that don't forget to mark this day after downloading your April 2023 calendar template!

April Fools’ Day is a day celebrated on April 1 every year and it has become a tradition for people to joke at each other on this day.

There are legends and beliefs about April Fools’ Day in different cultures. According to one of these beliefs, in 1564 the French King IX. Charles changes the beginning of the new year from 1st of April to 1st of January. The jokes made to ridicule those who continue to accept April 1st as the beginning of the year. And it became a tradition after a while.

Another legend about April Fools’ Day is the Fous festival celebrated on April 1st in Pagan culture. A similar celebration of Hilaria is celebrated in ancient Rome. In India, this holiday is celebrated under the name of Holi on 31st of March.

In this funny day, those who are joked (victims) are called “April Fool(s)”. People who make joke shout "April Fool(s)" to the unfortunate joke victims. Some newspapers and journals contribute to the April Fools’ day with fake news (with small explanations). Although popular since the 19th century, the day is not an official holiday in any country.

Mark the first day of April on your blank April 2023 calendar, so nobody can joke on you :)

Today's National Cherry Blossom Festival has grown from humble beginnings to the country's first spring celebrations. The schoolchildren did the first planting and other activities again, and in 1927 they held the first festival. Today, the Festival covers four weeks and welcomes more than 1.5 million people to enjoy a variety of programming and trees. Over the years, millions of people participated in the annual event, heralding the spring in the country's capital.

One of the most glamorous moments of the festival is the weekend of the parade and is definitely not to be missed. If you would like to experience this year's parade, don't forget to put a sign on your printable calendar for this day!

April 22 Earth Day was first created by John McConnell at the National UNESCO World Conference in San Francisco in 1969 to draw attention to the environmental threats that our world faces.

John McConnell proposed the equinox time, 21 March, as the date for Earth Day celebrations. Then, the first movement, which reacted to the environmental problems with a big public opinion, came into history as the first World Day celebrations on April 22, 1970 with the support of the Wisconsin Senator Gaylord Nelson and the organization of Denis Hayes.

Approximately 20 million people participated in these celebrations and many conferences and symposiums were organized and environmental problems were highlighted with them. The first 'Clean Air Law' and 'Clean Water Laws' were prepared related to Earth Day.

On April 22, communities around the world come together to celebrate Earth Day through activities such as cleaning city parks, collecting garbage from public spaces and raising money for environmental benefits.

Many cities in the United States plan Earth Day events such as concerts, conferences and museum exhibitions on environmental issues. Washington D.C., one of the most enthusiastic celebration place of Earth Day, contributes to environmental awareness by hosting large concerts and events.

If you want to increase your sensitivity to the environment and the world, be sure to book your April 2023 calendar printable in order not to miss the Earth Day activities!

Would you like to know some of the major April events in history before you filled out your own April 2023 calendar template with events that are important to you?

April 7, 1948 - The World Health Organization (WHO) is established.

April 25, 1956 - Elvis Presley has his first number one on the Billboard Pop Singles Chart with "Heartbreak Hotel" 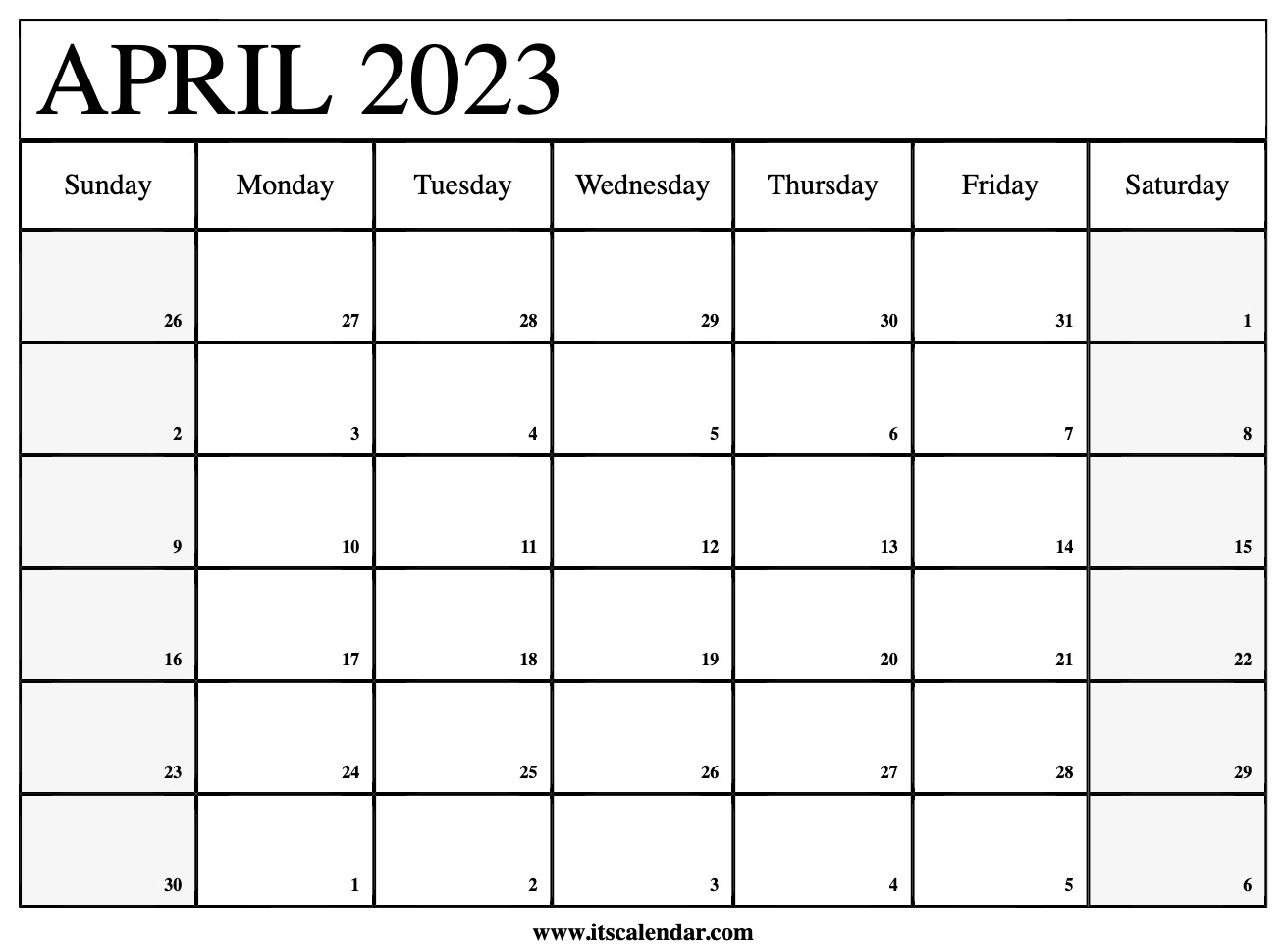 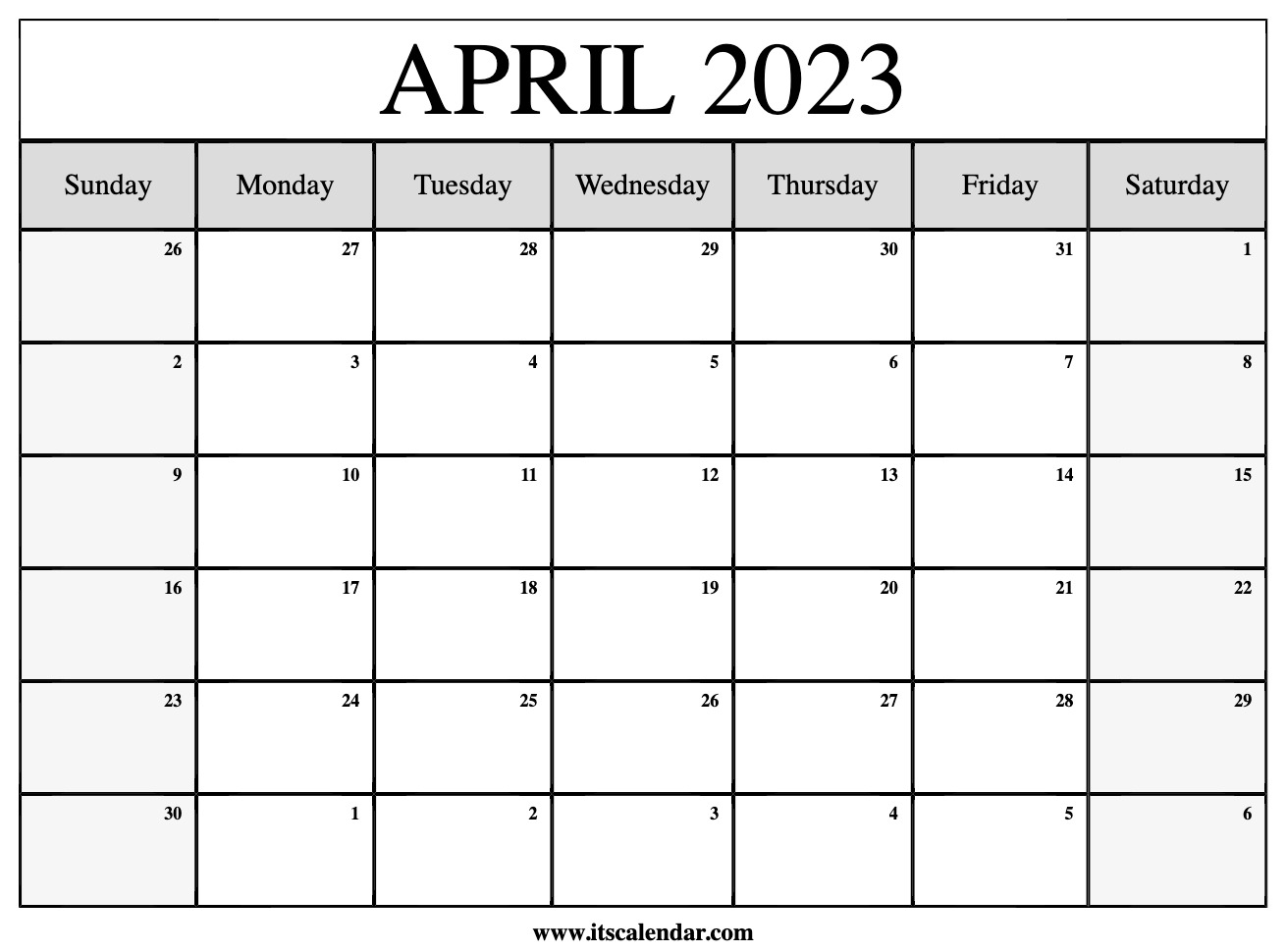 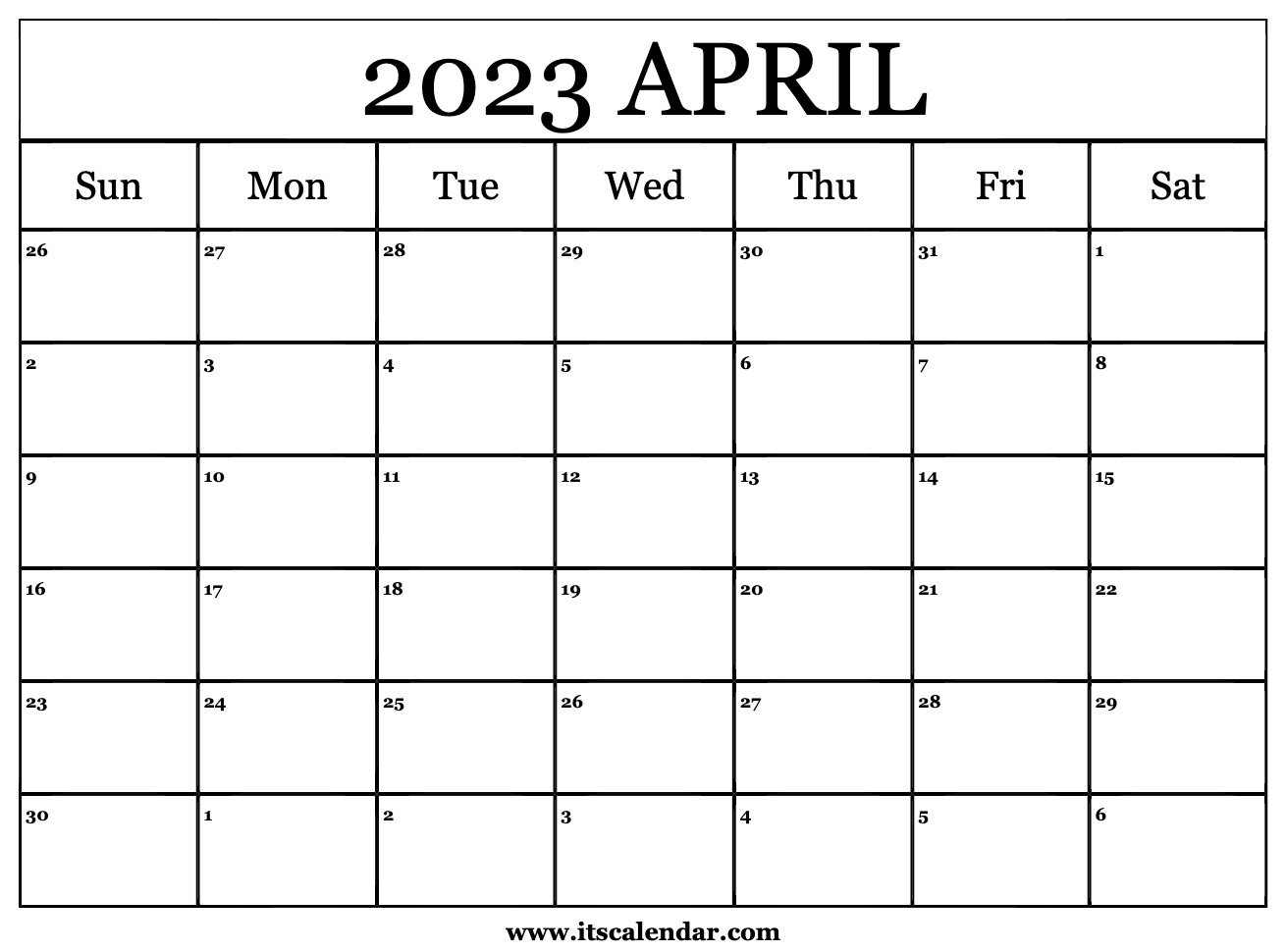 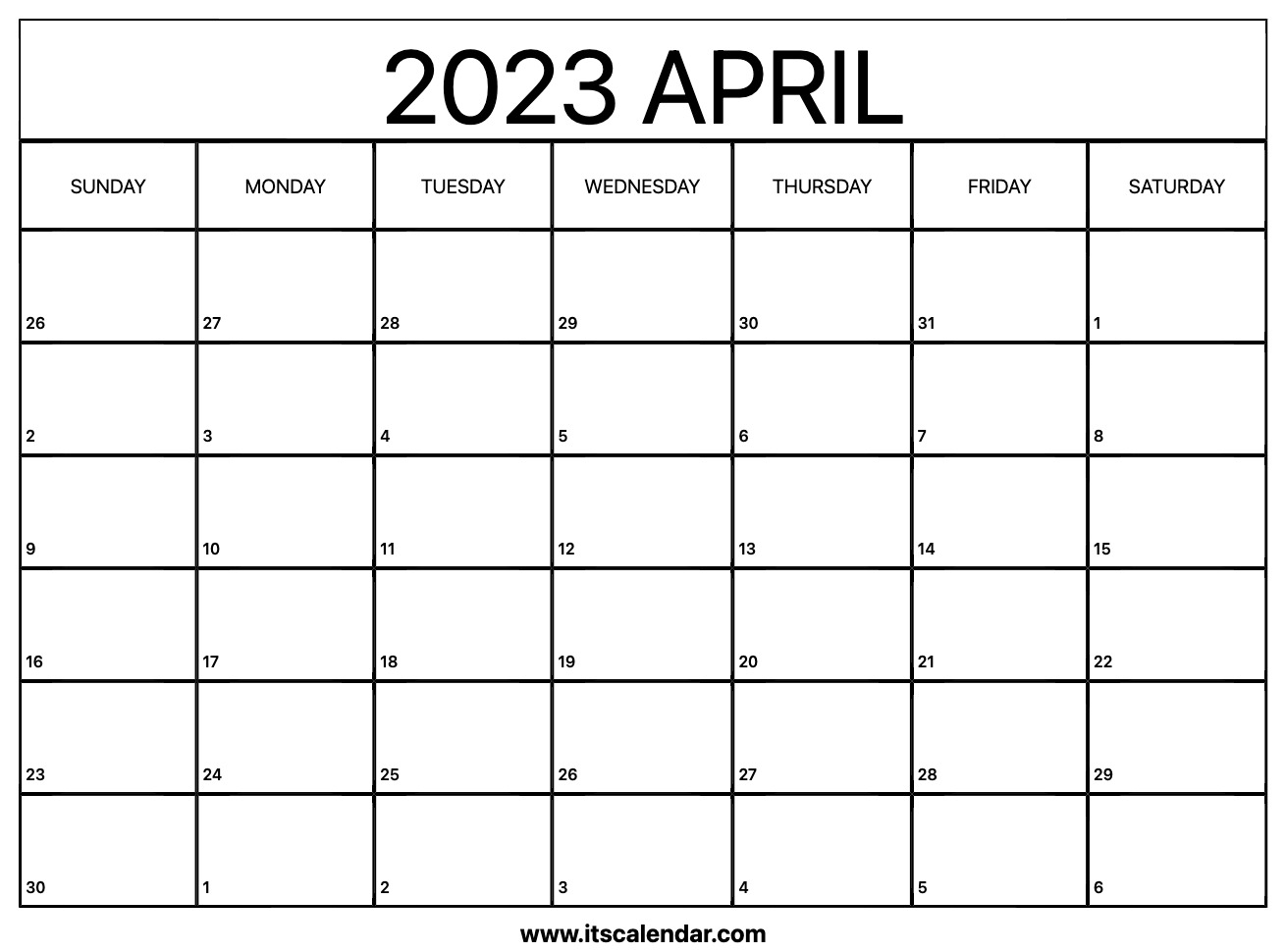