AN OVERVIEW OF THE LAST MONTH OF SUMMER

August is the eighth month of the year in both the Julian and Gregorian calendars, and it is the fifth of seven months to have a length of 31 days. August was originally named as “Sextilis” in Latin because it was the “sixth” month in the original ten-month Roman calendar under Romulus in 753 BC where March was the first month of the year.

August became the eighth month when January and February were added to the year before March about 700 BC by King Numa Pompilius. And August was 29 day when it is first added to calendar. Julius Caesar then added two days when he created the Julian calendar in 46 BC, giving August its modern length of 31 days.

In 8 BC, August had taken its new and current name in honor of Augustus. Macrobius quoted that Augustus chosen this month because it was the time period of several of his great victories, including the conquest of Egypt.

Not only to remember to attend these celebrations, but also to plan your month as you wish, you would better to have a PDF, Word, Excel, JPEG printable calendar. August is a time for vacations, so you need to organize your days before the month comes. It is very easy to make it with an August 2021 calendar printable. You will see, everything will be clear with your filled-by-you blank August 2021 calendar.

The month of August is the month when summer temperatures peaked for people living in the Northern Hemisphere. This month tourism is considered to be the most intensive month because living and working in the city is quite difficult. People are tired of having to constantly shower and sweat or cool off with air conditioners. Swimming in the sea or in the pool or lying down in the shade of a tree or umbrella becomes more attractive. So everyone goes to a seaside town or a hotel to spend the holidays they set months ago. August is a great time to sunbathe, swim, take part in outdoor activities, lazing all day, having fun and being discharged. Whether you are with your family, with your loved ones, or with a group of friends you can go to one of your favorite places or to a new destination and enjoy the holiday. You can spend the hottest times of the year in the coolness of the sea. August, as we say, is the busiest time of tourism, so you may need to get a little quick to find a comfortable hotel to spend the night in, or to reserve a place in the most beautiful restaurant of the place.

In short, you need a printable calendar before you can go step-by-step on your holiday plan. Which dates are right for you, do those dates coincide with another activity? Is there anyone's wedding, birthday or something? And, how are the meetings and deadline situations at work? Add them all to your August 2021 calendar template. So, all the appropriate days will be revealed. You can easily set a date range for yourself and your summer holiday which will be filled with unforgettable memories! Time is progressing, get an August 2021 calendar with holidays immediately, set your holidays and start counting down!

Now let's take a closer look at the last month of summer season!

AUGUST EVENTS IN THE UNITED STATES

Watermelon is 92% water, and so it is very satisfying in the summer heat. So, it shouldn't be surprised to have a special day for this life-saving summer fruit. While we are trying to survive in the August's sultry temperature, watermelons give a big juicy and sweety hand to us.

Watermelon is a vine-like flowering plant from southern Africa. Its fruit, which is also called watermelon, is a particular kind referred to by botanists as a pepo, a berry which has a thick rind and fleshy center. Pepos are derived from an inferior ovary and are characteristic of the Cucurbitaceae.

The watermelon fruit, loosely considered a type of melon has a smooth exterior rind (usually green with dark green stripes or yellow spots) and a juicy, sweet interior flesh (usually deep red to pink, but sometimes orange, yellow, or white).

To celebrate National Watermelon Day, have some watermelon for dessert this evening! Or you can start your day with watermelon at breakfast. Just slice it up and eat it plain, or if you try something else to celebrate this day, cook it on the grill or blend it into a cocktail. Do not forget a put a mark for this day on your blank August 2021 calendar and enjoy!

The birth of this day comes from August 11, 1984. At that day, President Ronald Reagan was conducting a sound check for a radio program. “My fellow Americans,” he said, “I’m pleased to tell you today that I’ve signed legislation that will outlaw Russia forever. We begin bombing in five minutes.” The joke was on him: The microphone was live and the entire world heard his words. National Presidential Joke day just began that day.

If you want to be part of the “celebrations” of this day, put a mark on your August 2021 calendar template and let it remind you the date.

Left Handers Day is an annual celebration for those were born left-handed. This day is a great way for right-handers to realize the left-handers and to have an awareness of the problems, especially for children.

International Left Handers Day is observed annually on August 13 to celebrate the uniqueness and differences of the left handers. The day was first observed in the year 1976 by Dean R. Campbell, founder of the Lefthanders International, Inc.

International Left Handers Day was created to celebrate people's sinistrality and to raise awareness of the advantages and disadvantages of being left-handed in a majority right-handed world. Left handers are from seven to ten percent of the world's population. Because of their minority, everything in daily life have set for the right-handed majority. since it is not an issue to go on their lives, they sometimes require some little changes would be very useful for them. Because of this, Left Handers Day has a role of creating awareness on problems faced by left-handers.

If you are a lefthander, this is absolutely your day! And if you are not, use this chance to understand their way of living which would be very difficult for you, right? Think about it! What about to insert a little sign for this day on your 2021 calendar to think deeply about it?

Women's Equality Day is celebrated in the United States on August 26 to commemorate the 1920 adoption of the Nineteenth Amendment to the United States Constitution. This prohibits the states and the federal government from denying the right to vote to citizens of the country on the basis of gender.

It was first celebrated in 1973 and is proclaimed each year by the United States President.

This date was especially chosen for the day of 1920 when Secretary of State Bainbridge Colby signed the proclamation granting American women the constitutional right to vote.

In 1971, following the 1970 nationwide Women's Strike for Equality, and again in 1973, as the battles over the Equal Rights Amendment continued, Congresswoman Bella Abzug of New York introduced a resolution to make certain the date of August 26 as Women’s Equality Day.

If you want to commemorate this important day in history and think about the equality, write a note on your August 2021 calendar printable, to have a chance to be thankful for living in a country recognizing the gender equality.

Would you like to know some of the major August events in history before you filled out your own August 2021 calendar template with events that are important to you?

August 26, 1920 - The 19th Amendment, guaranteeing women the right to vote, is formally adopted.

August 29, 1966 - The Beatles play their final US Concert at Candlestick Park in San Francisco. 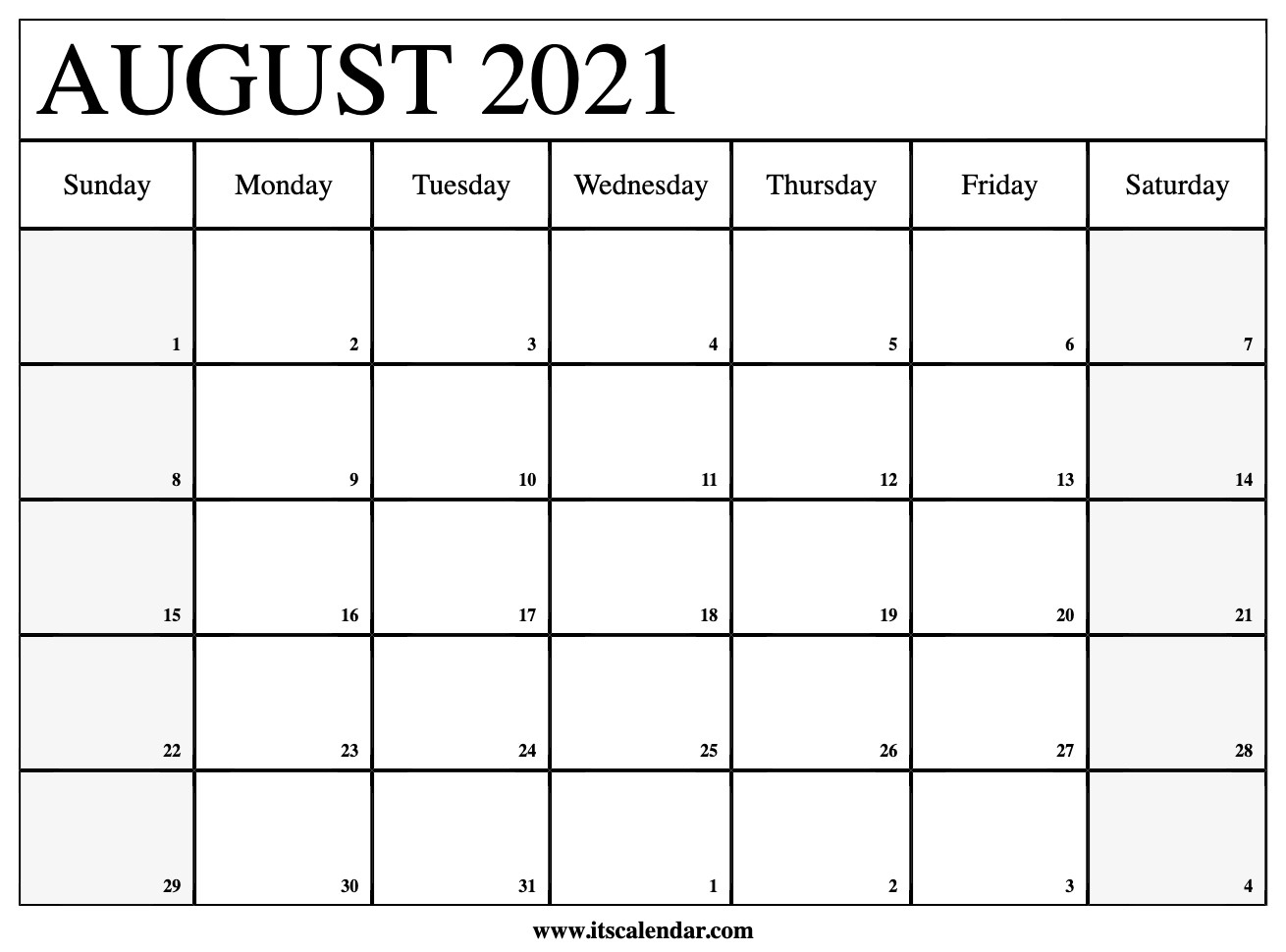 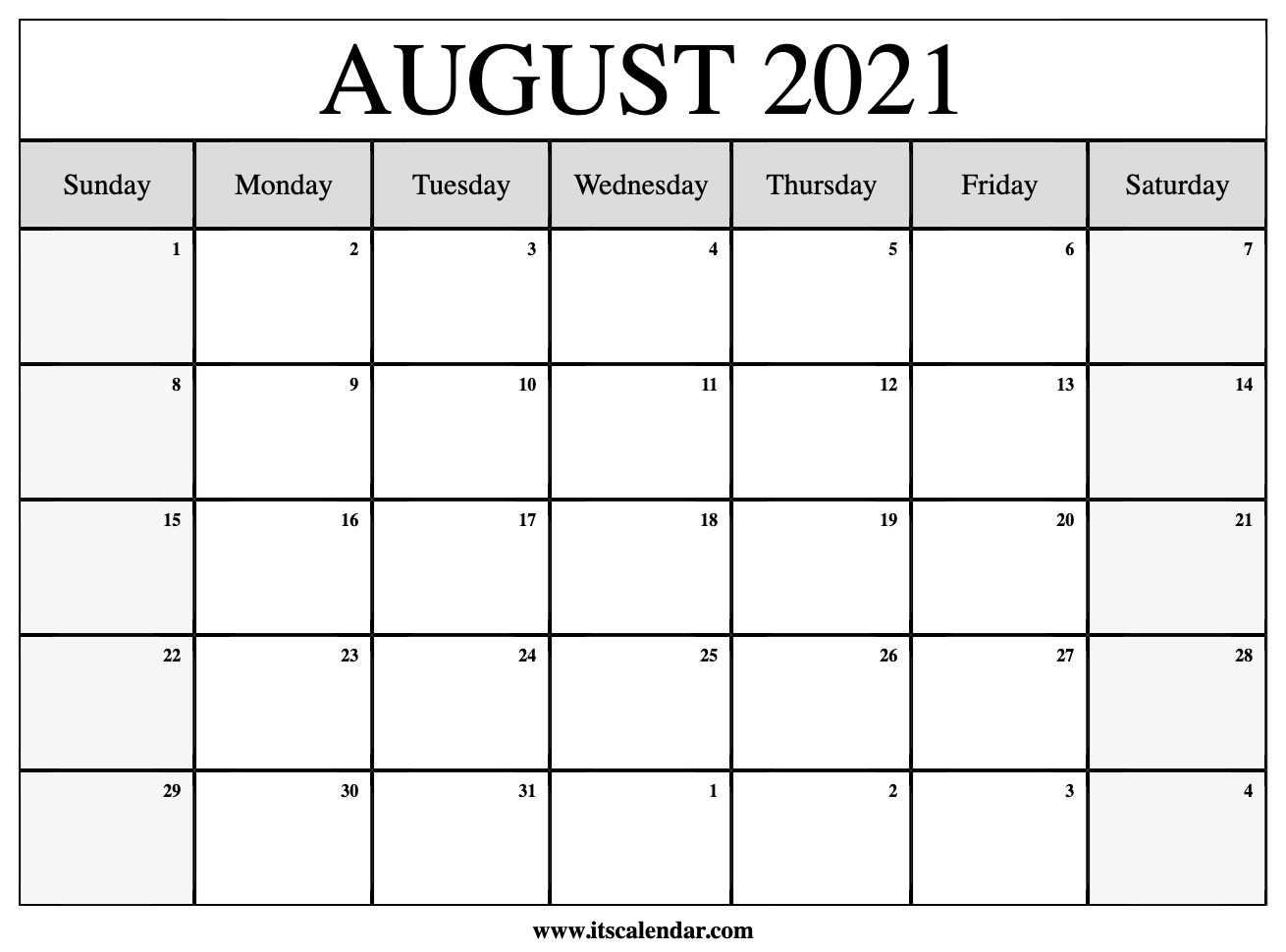 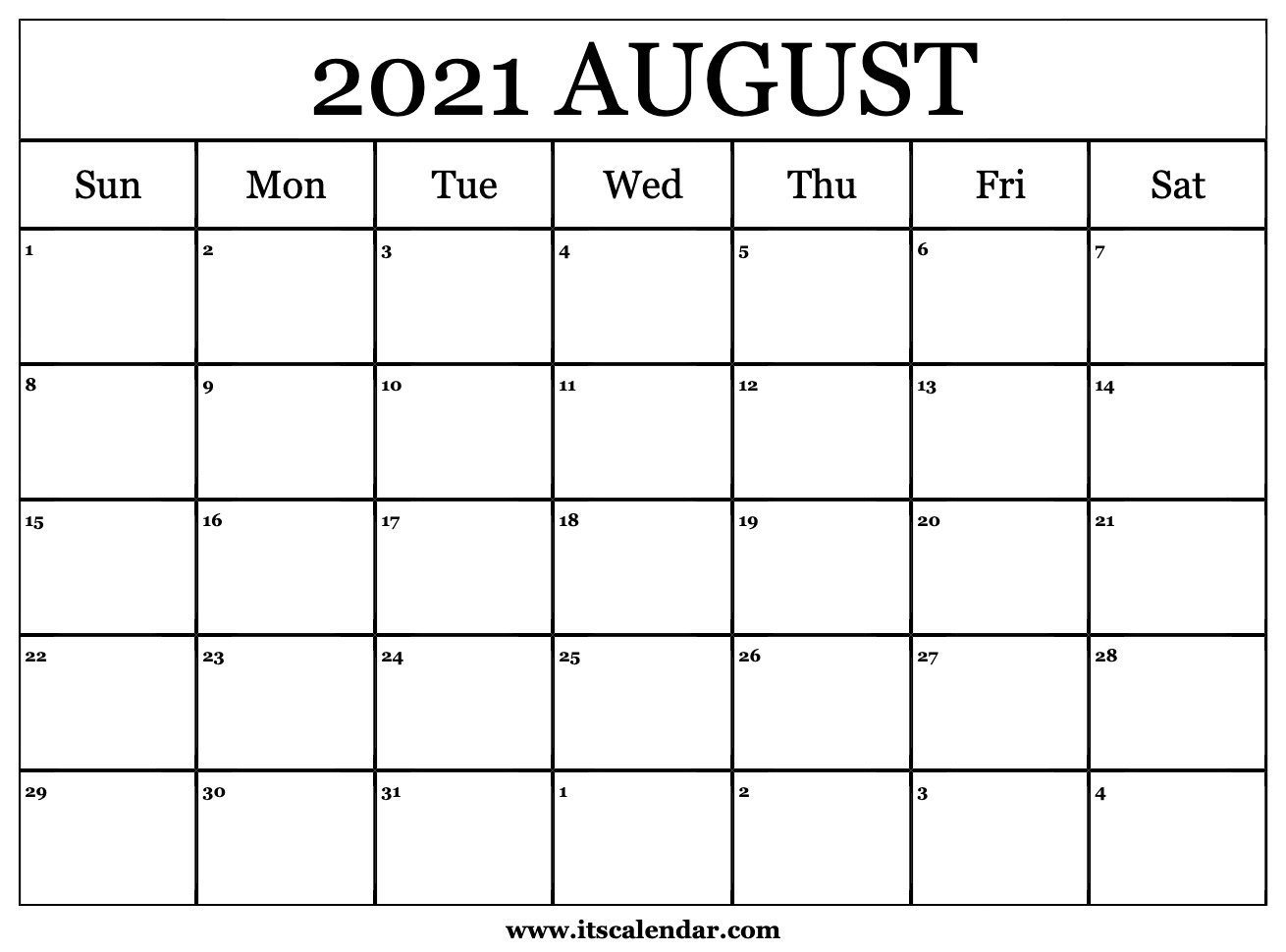 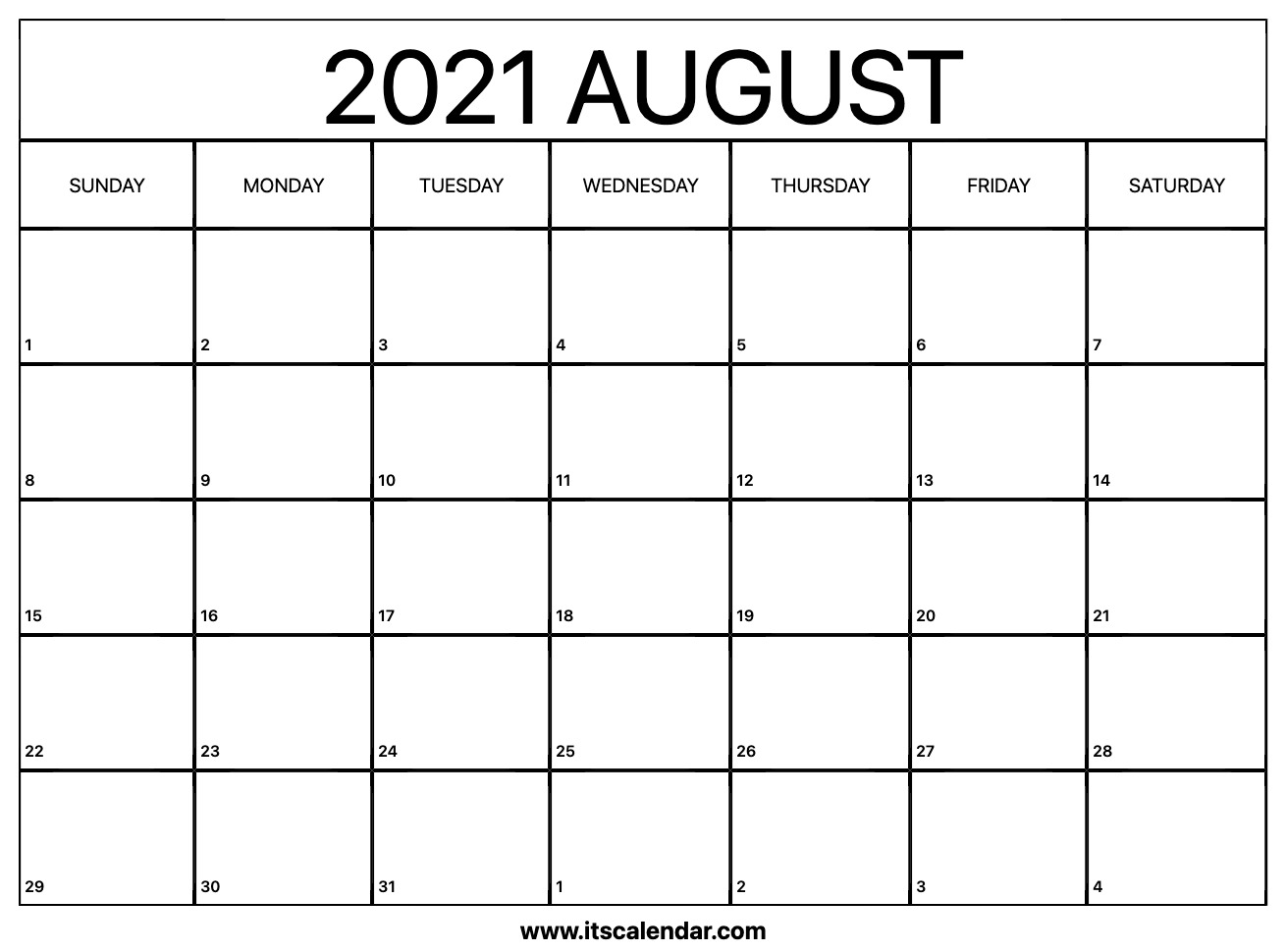