AN OVERVIEW OF THE FIRST MONTH OF SUMMER

The Latin name of June is Junius. Ovid presents multiple origins for this name in the Fasti, a poem about the Roman calendar. The first is that the month is named after the Roman goddess Juno who is the goddess of marriage and the wife of the supreme deity Jupiter. The second is that the name comes from the Latin word iuniores, meaning "younger ones", the opposed to maiores ("elders") for which the previous month May. Another belief about the name June is named after Lucius Junius Brutus, founder of the roman Republic and ancestor of the Roman gens Junia.

In June the summer season in the United States begins. Thanks to the rising air temperature, it is a good month to go to the seaside, lake trips, festivals, camps and concerts. June is also the closing month of schools, so it is a great month to travel and enjoy the beautiful weather for families. In June which is one of the most popular times for travel, calendars are revised and free time for trips is created.

Shortly, June is a month that life is more outside than inside. It means you have so much things to do. For avoiding to miss any of them, you may prefer to use a Word, Excel, PDF, JPEG printable calendar to set everything wisely. There is no time to waste, just download a June 2023 calendar printable, and stop worrying about being unplanned anymore. Now let's take a closer look at the first month of summer.

JUNE EVENTS IN THE UNITED STATES

Flag Day is not a federal holiday but a national celebration day. It is the celebration of the day when George Washington and the other founders of the country decided in 1777 to officially determine the stars and lines in the flag we know as the American flag. On June 14, 1916, President Woodrow Wilson announced the day of this celebration. On the day of the flag, people hang their American flags outside their homes, and the businesses display their flags in their shop windows. This important day is an opportunity for the American people to understand the importance of the flag, which is the symbol of their country, and to commemorate the founders of the country.

If you want to anticipate the Flag Day celebrations and do not want to forget this date, only thing you need to do is marking this day after downloading your June 2023 calendar template!

Father's Day is a special day celebrated on the 3rd Sunday of June every year. The purpose of Father's Day is to celebrate and remember the fathers and their reassuring existence. Father's Day was declared a national holiday in the United States in 1972. On Father's Day, children thank their father with a gift, sometimes families go to a dinner together, and sometimes just a big hug and a kiss is worth more. Regardless of how it is celebrated, it is important to honor and celebrate fathers for being a good father and (often) a hero.

Father's Day was not celebrated in the US, outside Catholic traditions, until the 20th century. It started to be celebrated in the early 20th century to complement Mother's Day by celebrating fathers. After Anna Jarvis' successful promotion of Mother's Day in Grafton, West Virginia, the first celebration of Father's Day was organized on July 5, 1908, in Fairmont, West Virginia, in the Williams Memorial Methodist Episcopal Church South. Grace Golden Clayton was mourning the loss of her father. When in December 1907, the Monongah Mining Disaster in nearby Monongah killed 361 men, 250 of them fathers, leaving around a thousand fatherless children. As a commemoration to those fathers, Clayton suggested that pastor Robert Thomas Webb honor all of them.

Americans resisted the Father's Day celebrations for its first years, because of viewing it as nothing more than an attempt by merchants to replicate the commercial success of Mother's Day. However, the father of a family is worth to be celebrated and honored, if a day exists for mothers, it should exist equally for the fathers as well. So, Father's Day is a good day to understand the place of your father in your life and thank him for all the sacrifice he has done for you. If you have a chance, do not miss to be with them and celebrate together.

Specify 16th of June on your blank June 2023 calendar and express your love to your dad!

The Solstice, June 21st, the official first day of summer and the longest day of the year in the Northern Hemisphere. From June 21 to the winter solstice on December 21, the nights began to grow and the days began to shrink. Then, the cycle starts all over again.

People have recognized and celebrated the summer solstice since ancient times. June 21st marked the beginning of the Greek calendar year, which was full of festivals. Today, this first day of summer is celebrated with parades, parties, concerts and outdoor events all over the USA. New York celebrates June 21 with a different approach from the sunshine to the sunset on Times Square through the annual "Mind Over Madness" yoga day. The city of Santa Barbara California on the West Coast celebrates this special day with a three-day art festival. This festival hosts a different theme every year, and people from all over the country, even from abroad, come here to dance, to listen to music and to watch the public art installations created especially for the event.

Do not miss one of the most enjoyable celebration day and just put a sign on your printable calendar for to welcome Summer Solstice on 21st of June, Friday!

Leszek Sibilski, who is a Professor of Sociology and longtime advocate for issues related to climate change, the environment, family, public policy, global poverty, etc. campaigned for the United Nations Resolution on World Bicycle Day. In the end, it received the support of Turkmenistan and 56 other countries. The supporters of this recognition since 2016 also took part in the World Cyclists Alliance (WCA), the European Federation of Cyclists (ECF) initiative.

The World Bicycle Day logo was designed by Isaac Feld and the accompanying animation was made by Professor John E. Swanson. The visual work shows the various types of cyclists traveling around the world. At the bottom of the logo is labeled # June3WorldBicycleDay. Thanks to this label, people from all over the world share their bike or bike ideas on June 3. The aim of this important day, which has been recognized and formalized, is to show that the bike belongs to all humanity and contributes to a more livable world.

June 3rd is a good way to get your bicycles and cycle around on your own, with your friends or families, so do not forget to put a special sign for this day on your June 2023 calendar printable.

Would you like to know some of the major June events in history before you filled out your own June 2023 calendar template with events that are important to you?

June 18, 1983 - Sally Ride became the first American woman to go into space when she flew on the space shuttle Challenger.

Next month is July. 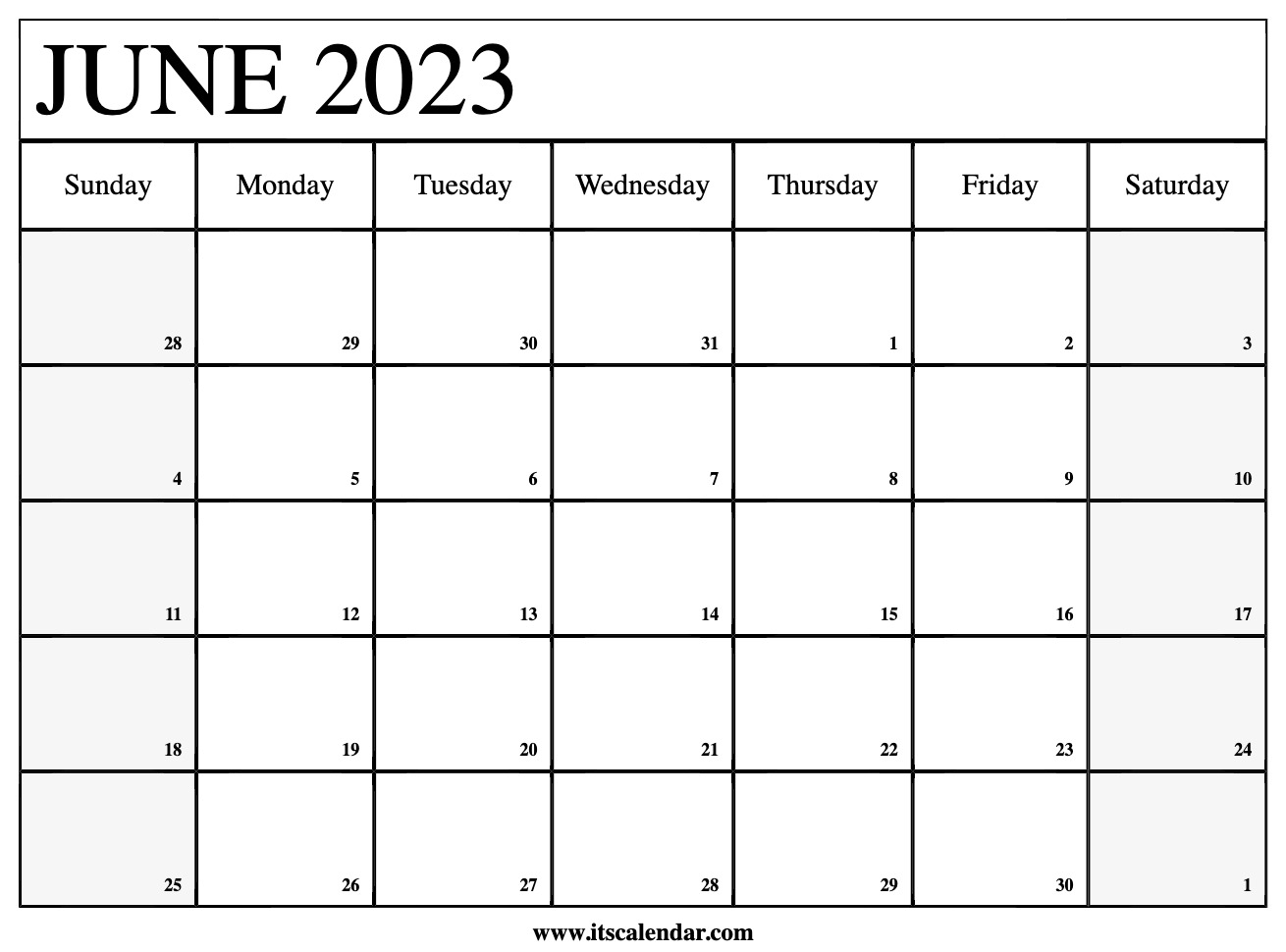 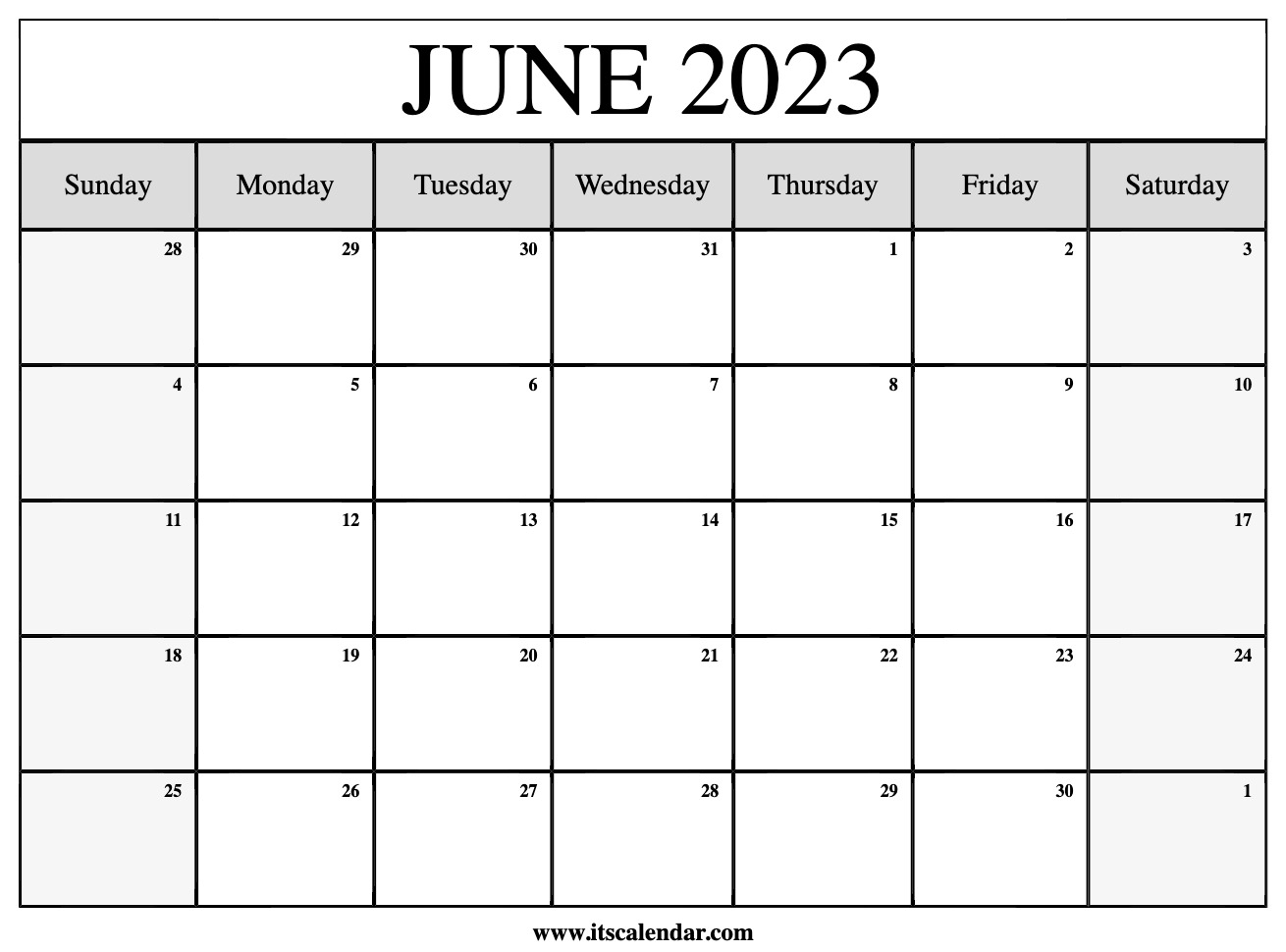 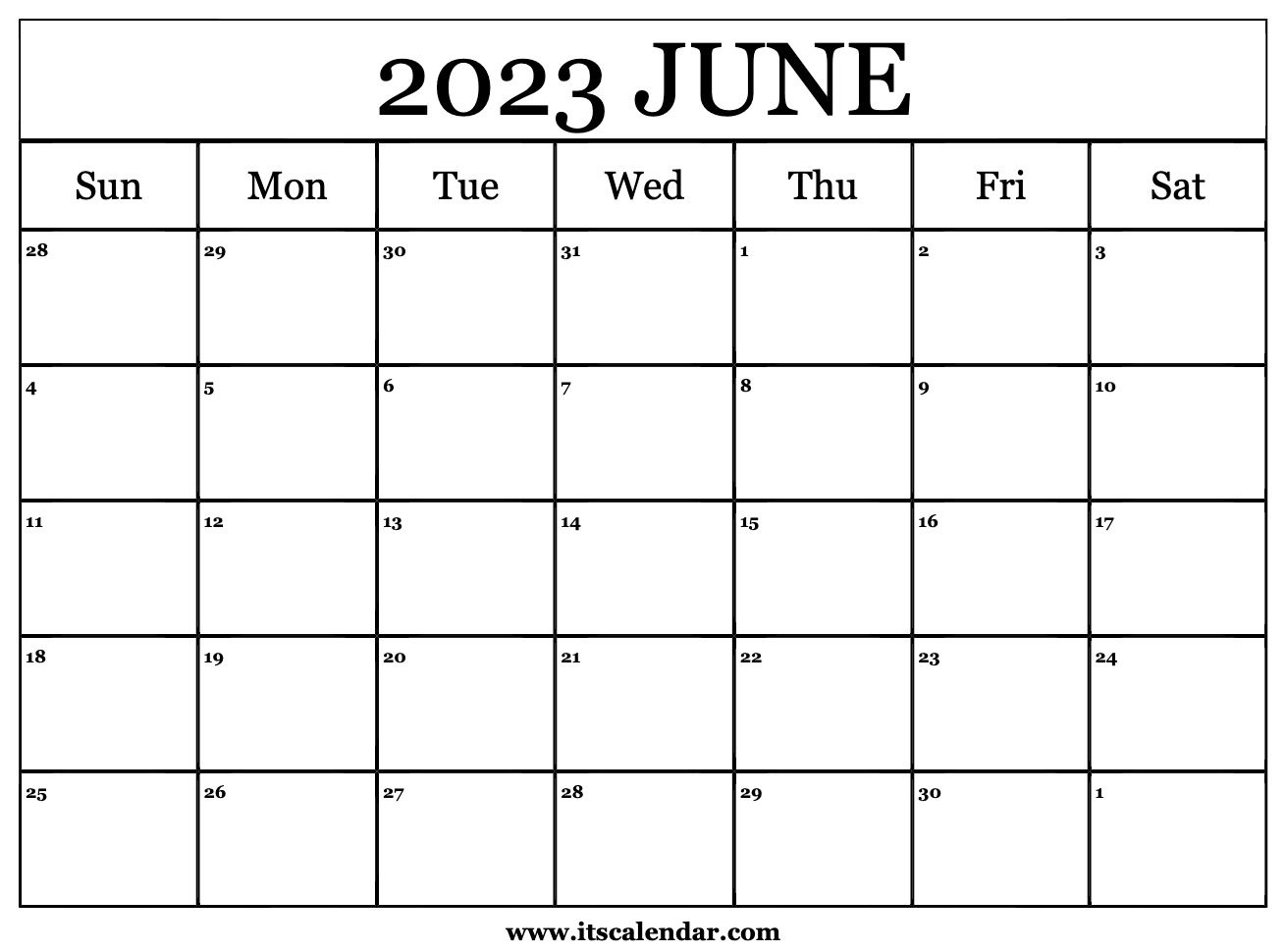 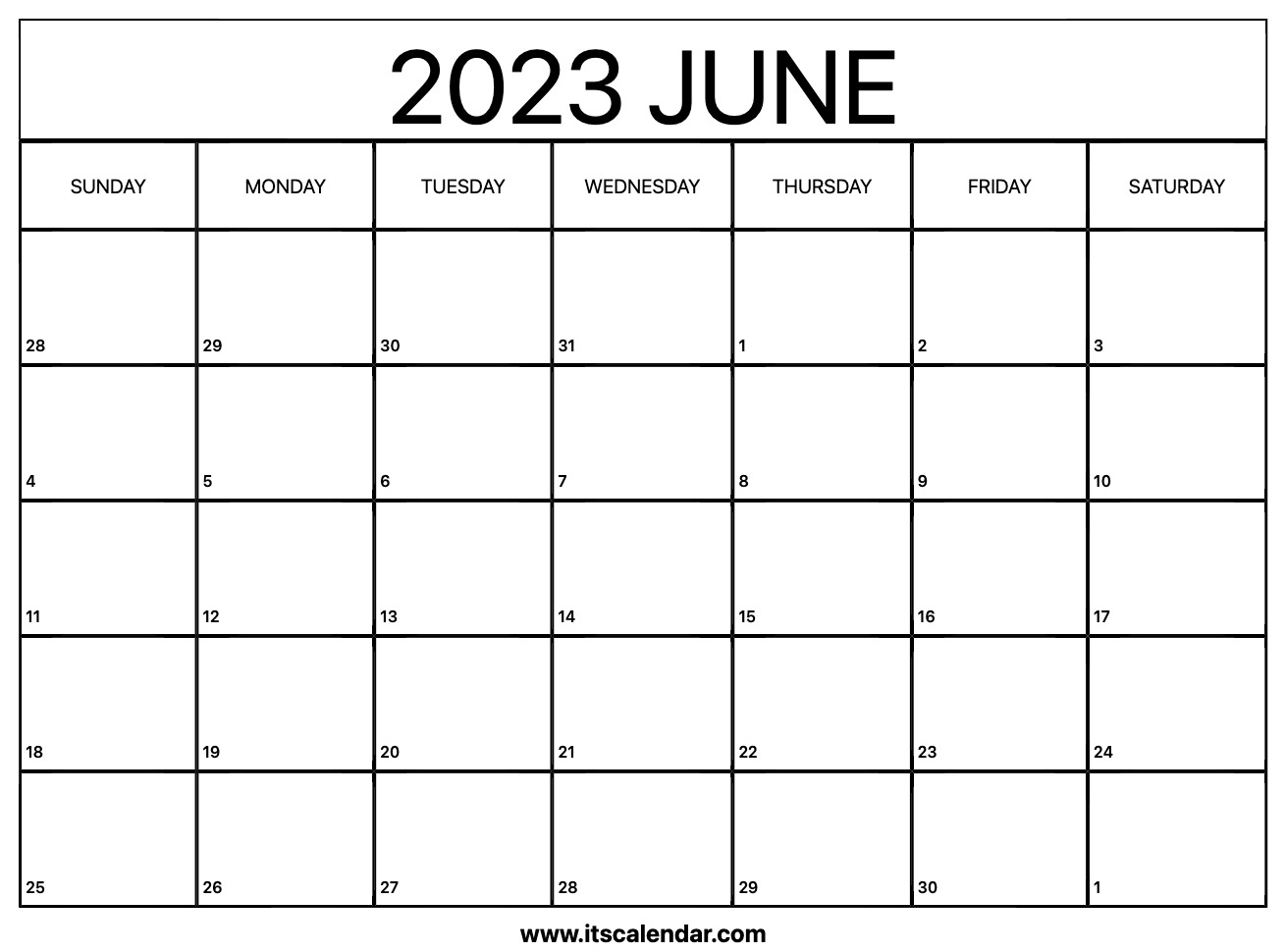