AN OVERVIEW OF THE SHORTEST MONTH OF THE YEAR

February is the second and shortest month of the year for both Julian and Gregorian calendar. This month is 28 days in common years and 29 days in leap years, with the quadrennial 29th day being called the leap day and it comes one time in every four years.

The Roman month Februarius was named after the Latin term februum, which means purification, held on February 15 (full moon) in the old lunar Roman calendar. January and February became the last two months to be added to the Roman calendar because the Romans considered the winter a monthless period. January and February were added to the calendar by Numa Pompilius around 713 BC. February became the second month of the year around 450 BC; it was the last month of the year before this date.

Since February is the last month of winter, although the weather is still cold, it is the harbinger of spring. January, the coldest month of the year, is finished. Even if it was too slow, the air temperature started to increase. People slowly start to make holiday plans, the dream of warm weather. Because there are the March, April, and May, so spring. Of course, this is true for those who live in the Northern Hemisphere that love summer and warm weather. For winter-lovers, February means the end of the cold air, hot heater, warm tea, snow, Christmas, new year, coffee & blanket and sweater days. The cold weather, which also includes March, will last a little longer but will be replaced by a warm flowering season.

As we begin to experience the second month of the year, we realize that the days are going at great speed. This may sometimes cause some fuss. If we have postponed the decisions we have taken for the new year and we have not planned our future days, we would like to start planning immediately. There is no need to worry about this.

Having a printable calendar makes it very easy. Monthly custom calendars are ideal for marking all days as you wish. For example, you can schedule a February calendar day by day. You can mark all of your important days, future celebrations, all the public and personal holidays, decisions, workout program, studying planning and monthly goals in the blank printable calendar so that you can be much more planned. And this makes you feel relaxed, ready and happy.

With the February 2023 calendar template, which you can download easily, all days are waiting for you to plan. You can easily manage your operations such as writing-drawing-deleting by downloading brand new blank calendars. Using a blank February 2023 calendar will make you much more targeted and readier to move. You won't miss a special day in February, you won’t forget any birthday or anniversary, or if you manage a company or team, you never miss any payment or meeting day.

Now let's take a closer look at this shortest month of the year.

FEBRUARY HOLIDAYS IN THE UNITED STATES

Presidents' Day in the United States

President's Day is a date of celebrating and honoring the life, victories, and successes of George Washington, the first President of the United States (1789-1797). George Washington is also called as the father of the country. Although this day is mainly referred to George Washington, it is also, in practice, often used to honor and remember all past US presidents except for him, especially Abraham Lincoln and Thomas Jefferson.

President's Day was created in 1879 and firstly celebrated the following year, in 1880. It was originally held on Washington's actual birthday (February 22) however in 1971 this date was changed to the third Monday of February. President's Day is the first federal holiday to be created in memory and honor of an American citizen.

President's Day is being celebrated with community celebrations and public parades. To the memory of this day, most of the stores hold special sales. The Purple Heart military badge (which has an image of Washington on it) for soldiers injured in the course of duty is being awarded on President's Day.

FEBRUARY EVENTS IN THE UNITED STATES

Although it is defined as a day triggering the consumption frenzy by some, it is an important day based on very old days, Valentine's Day. On this day where love, romance, and loyalty are expressed, couples tell each other their feelings with gifts or a romantic dinner. Although it is not a blessing day for those who don't have a lover, they wish to be with a partner on 14 February next year.

Now let's take a look at the history of this romantic day. By the way, dear couples, don't forget to mark February 14 after downloading your February 2023 calendar template!

The history of Valentine's Day dates back to the 3rd century. According to the legend, Emperor Claudius II was a ruler who ruled Rome with its strict rules and cruelly. The biggest problem for him was not finding soldiers to fight in his army. He was thinking that the only reason for this is because the men of Rome did not want to leave their loves and their families. That is why Claudius forbade all engagements and marriages in Rome. St. Valentine was a priest who lived in Rome during the reign of Claudius. St. Valentine continued to secretly tie the knot of couples, in spite of Claudius' ban, together with the chaplain, Saint Marius. However, the emperor soon learned this. St. Valentine was arrested for continuing to break the cruel rule. And he was beaten to death for his actions. St. Valentine was buried in the Christian martyrs' cemetery on February 14, 270. It is believed that Valentine's Day was celebrated as of that day.

When we look at today's Valentine's Day, we see that it is becoming a more commercially oriented concept. Souvenirs decorated with heart figures, exclusive jewelry discounts, special menus in restaurants, romantic movies on the theme of lovers, florists, romantic-couple gifts with special designs ... From 14 February, all showcases are filled with red hearts. Some people find this a bit exaggerated, while others find it very sweet and romantic.

February 14 is also considered as a very suitable date to propose marriage or to marry for many years. Regardless, Valentine’s Day is a great day for us to remember and to express our love and to embrace our loved ones!

Black History Month (All of February)

Every year in the United States, February is celebrated as the "Black History Month," with the aim of glorifying the contributions and history of African-Americans. This application was launched by American historian Carter G. Woodson, with the idea of educating the American people about the cultural and respectable achievements of African Americans.

The first celebration was held on 12 February 1926 with one week of activities. For many years it was celebrated in the second week of February when it coincided with the birthdays of President Abraham Lincoln and anti-slavery journalist Frederick Douglass. In 1976, on the occasion of the country's two-hundredth-anniversary celebrations, the scope of events held throughout the country for one month was expanded to Black History Month.

The origin of this day comes from the German Candlemas holiday. On Groundhog Day traditionally, the hedgehog (or groundhog) occurs on February 2. If it wanders around for a while after it leaves its nest, it means the early spring will come. If it is uncomfortable with daylight and immediately returns to its home, it means that the cold will last for at least six weeks.

Every year on February 2, many people wait for the official weather forecast groundhog, Punxsutawney Phil, who came up with his weather prediction in Punxsutawney, Pennsylvania, near Pittsburgh. If you don’t want to miss this event, mark the day on your printable calendar.

The Super Bowl is the championship game of the National Football League (NFL) held annually since 1967. The game is the final event of a regular season that begins in the late summer of the previous calendar year. Roman numerals are used to identify each game, rather than the year in which it is held. In 2020, Super Bowl LIV (54rd) is held on Sunday, 2rd of February at Mercedes Benz Stadium Atlanta, Georgia. Do not forget to add this event to your blank February 2023 calendar!

Would you like to take a look at the major February events in history before you filled out your own February 2023 calendar template with events that are important to you?

February 18, 1930 - A ninth planet is discovered in the solar system and is named Pluto. The discover was Clyde Tombaugh. 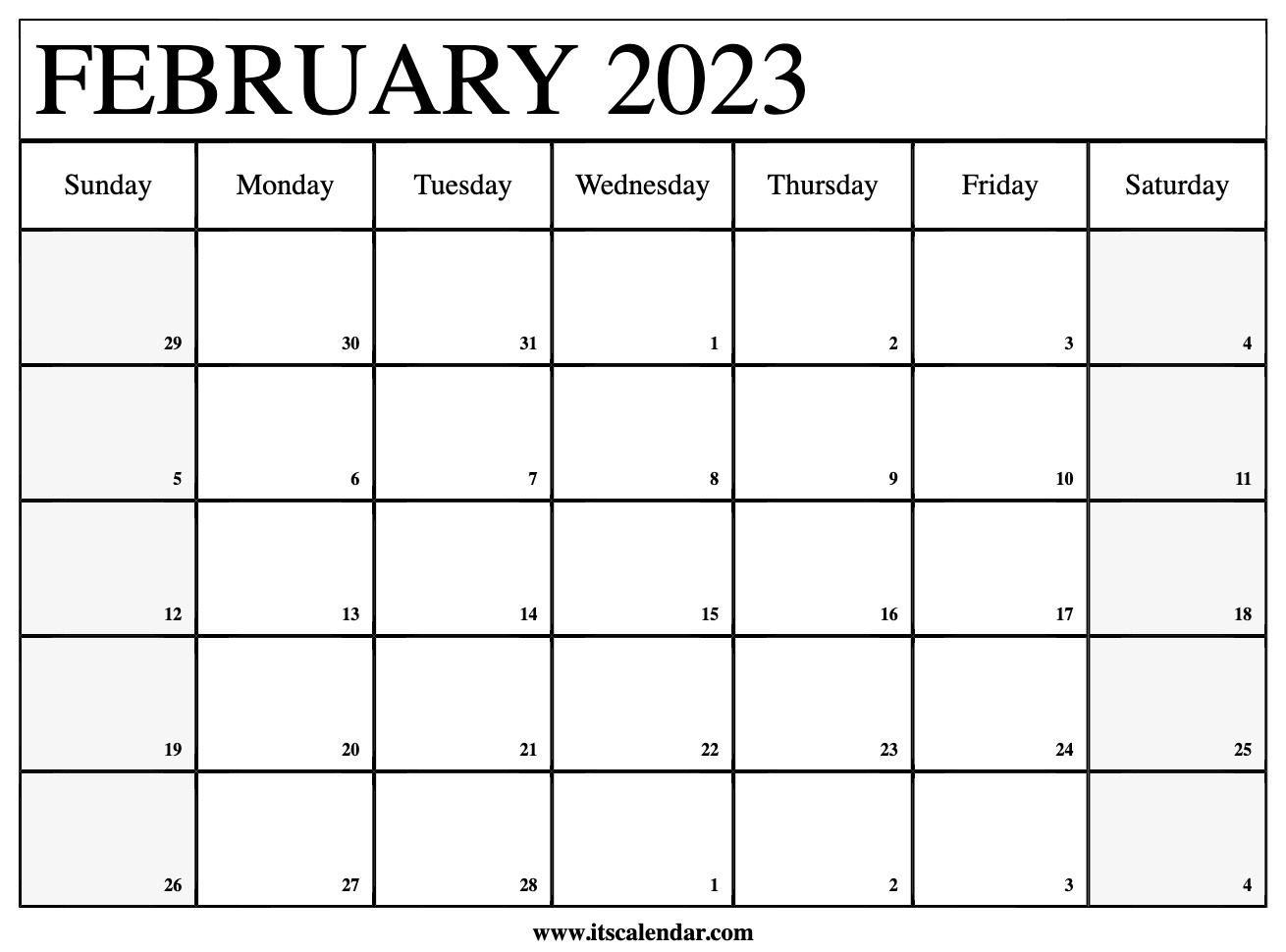 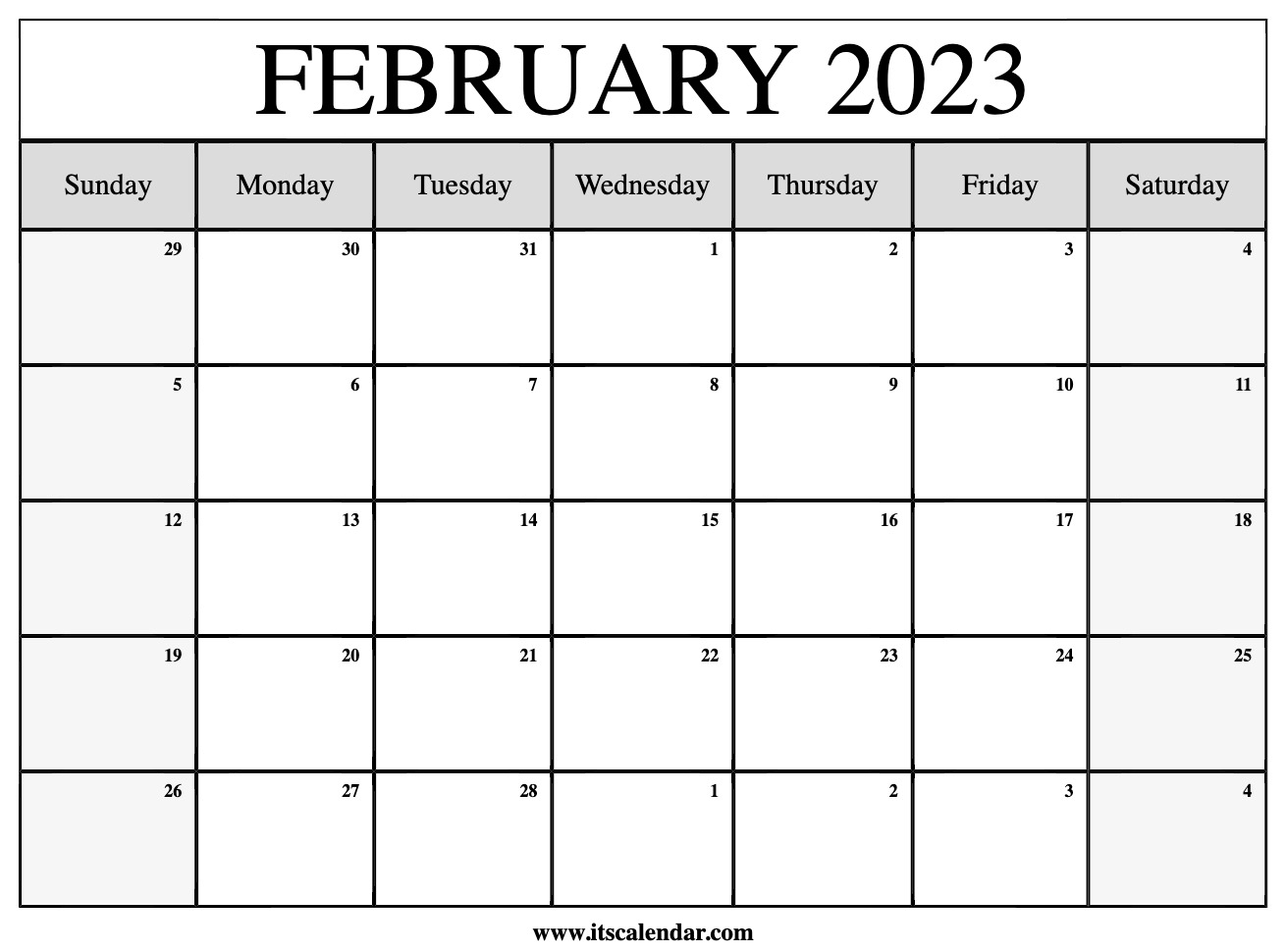 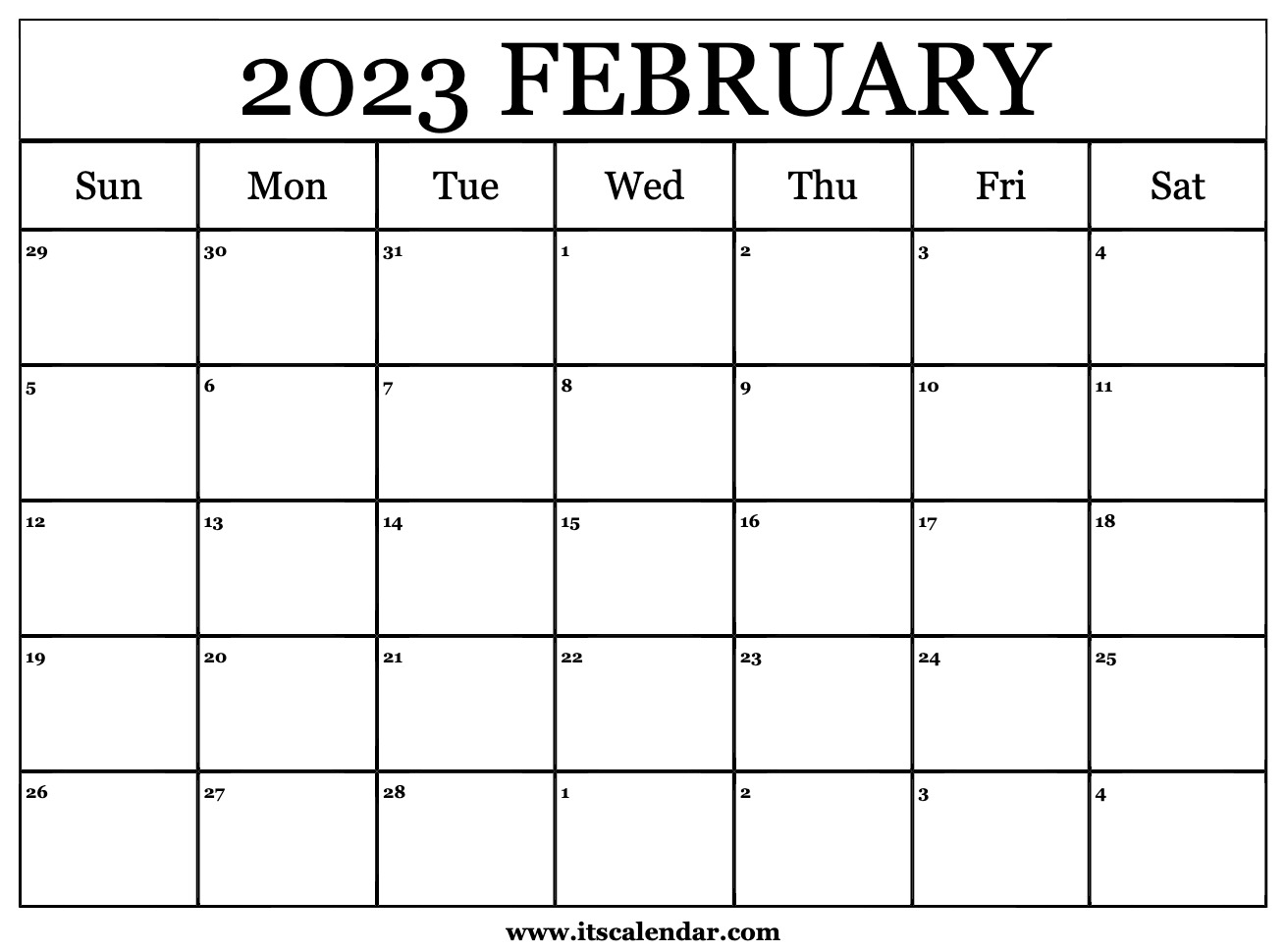 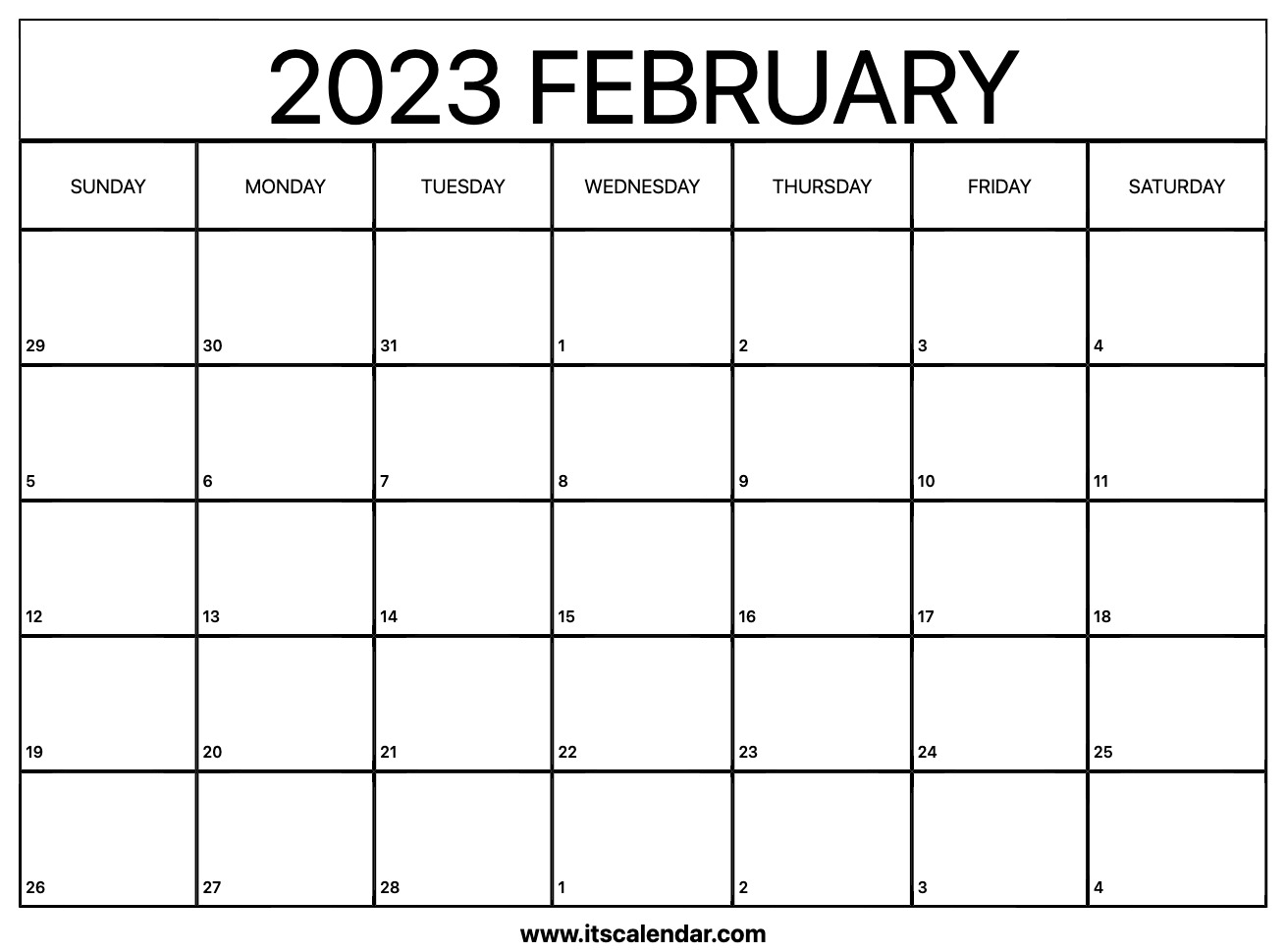