AN OVERVIEW OF THE MONTH OF SUMMER VACATIONS

July is the seventh month of the year (between June and August) in both the Julian and Gregorian Calendars. It is the fourth of seven months to have a length of 31 days. It was named by the Roman Senate in honor of Roman General Julius Caesar, for being the month of his birth. Before this acceptance, it was called Quintilis, being the fifth month of the 10-month calendar.

During July we are sure you will have many events to insert in your calendar. To get a Excel, Word, PDF, JPEG printable calendar should be the first step to organize your month easily and riskless. When you put all of your specific days, celebration, holidays and outdoor activities on your July 2023 calendar printable, there will be no need to worry about to miss any events you want to participate.

If you want to get into the July spirit, you can go to the nearby beaches every weekend. July, which is also the wedding season, is a month need to be planned for holidays or invitations. You can do this easily with a July 2023 calendar template. Marking events on a blank July 2023 calendar is both easy and fun. And very useful of course! Then it's also so comforting to draw what you write on your useful printable calendar. Only need is to have a July 2023 calendar with holidays to see all holidays to plan something special!

Now let's take a closer look at this month inviting us to the coasts!

JULY HOLIDAYS IN THE UNITED STATES

Independence Day (the Fourth of July) is one of the biggest federal holidays in the United States to commemorate the adoption of the Declaration of Independence on July 4, 1776.

The Continental Congress declared that the thirteen American colonies regarded themselves as free and independent states, the United States of America, and were no longer connected to the British Crown. The Congress actually voted to declare independence two days earlier, on July 2.

During the American Revolution, the legal separation of the Thirteen Colonies from Great Britain in 1776 actually occurred on July 2.

On that date, the Second Continental Congress voted to approve a resolution of independence proposed in June by Richard Henry Lee of Virginia declaring the United States independent from Great Britain's rule. After voting for independence, Congress turned its attention to the Declaration of Independence, a statement explaining this decision, which had been prepared by a Committee of Five, with Thomas Jefferson as its principal author. Congress discussed and revised the text of the Declaration and two days later it is had been approved on July 4.

Government offices, banks and many shopping stores is closed on this day. Each and every town in the country organize some events such as fair, festival or parade. Many neighborhoods hold barbecues and set off fireworks. Major cities such as New York City, Philadelphia, Washington, D.C., and Boston have the biggest July 4th celebrations including major parades and music concerts.

We are sure that you will attend commemorations and events organized on this day so only thing you need to check if you mark the fourth of July on your blank July 2023 calendar.

JULY EVENTS IN THE UNITED STATES

National Bikini Day is created to celebrate the anniversary of the invention of the two-piece bathing suit in 1946 by a Parisian fashion designer, Louis Reard. Due to its extraordinary design, the bikini couldn't be adapted easily and fast. The times to be gained more interest of the bikini became the period that film stars like Ava Gardner and Brigitte Bardot started to wear bikinis on public beaches and in their films.

The goal of this joyful holiday is usually to get a new bikini, to go to the closest beach or to some famous beaches of islands such as Maldives, Bali, Hawaii!

Put a little bikini sign on 5th of July on your July 2023 calendar template, so you can enjoy swimming and sunbathing in your bikini to celebrate Bikini Day!

National Ice Cream Day is celebrated each year on the 3rd Sunday in July. This day has so much fun with a bowl, cup or cone filled with your favorite flavor of ice cream. People in the Persian Empire was putting snow in a bowl, pouring grape-juice over it and eating it as a dessert many times ago.  They did this when the weather was hot and used the snow saved in the cool-keeping underground chambers or took it from the snowfall remained at the top of the mountains.

If you are an ice cream-lover, do not forget to mark 21st of July on your blank July 2023 calendar and it is a good chance to celebrate this day while eating your delicious ice cream!

National Parents’ Day is celebrated to honor all parents on the fourth Sunday in July each year. There was Mother's Day in May and Father's Day in June. And in July, we are bringing all our parents together and can show them our feelings all at once.  As everyone knows, parents play an important role in the lives of children, of all of us. From the moment we are born, our parents are our protectors, mentors, supporters, biggest fans and role models. Families are the core of all communities. Therefore, on the National Parents’ Day, we may have a chance to honor and remember their sacrificing while trying to raise up their children well in a challenging world. National Parents’ Day was created in 1994 when President Bill Clinton signed a Congressional Resolution into law for recognizing, uplifting, and supporting the role of parents in the rearing of children.

Do not forget to put a sign on your blank printable calendar for Parents' Day to spend some time with your parents or visit someone who was like a parent to you.

International Friendship Day is a day designed to foster friendships and to overcome a bias the beliefs putting up a wall on friendship such as age, color, religion and other factors. Today, it is getting more necessary to understand and build world diversity. International Day of Friendship was first declared by the United Nations in 2011 with the intent of building communities and helping move towards world peace. The United Nations fosters governments and organizations to held events to promote mutual acceptance and understanding between people of different backgrounds. This day is celebrated each year on July 30th and becomes good way to understand the importance of diversity and friendships in life!

If you are one of those who believe in the importance of friendship and you can be friends with everyone regardless of what they look and believe in, then this is your day! Give this day a place in your July 2023 calendar printable to remember it and enjoy the real friendships you have!

Here are some of the major July events in history for you. In order to create your own history, start with filling your blank July 2023 calendar with events that are important to you!

July 20, 1969 - The Apollo 11 astronauts made history when the first man is landed on the moon by the United States and Neil Armstrong and Edwin 'Buzz' Aldrin became the first humans to set foot on the Moon leaving the first human footprints in its dusty soil.

July 18, 1976 - The first perfect 10 ever recorded in Olympic gymnastics was achieved up by Romania's 4-foot-11, 88-pound Nadia Comaneci on the women's uneven parallel bars.

July 13, 1985 - 1985 The Live Aid Concert was a series of rock concerts held to raise funds for famine relief in Ethiopia around the world in cites including London, Philadelphia, Sydney and Moscow.

July 5, 1996 - The first cloning of an animal by scientists was revealed by the Roslin Institute in Scotland when Dolly the Sheep was cloned from tissue from a 6-year-old ewe's udder. 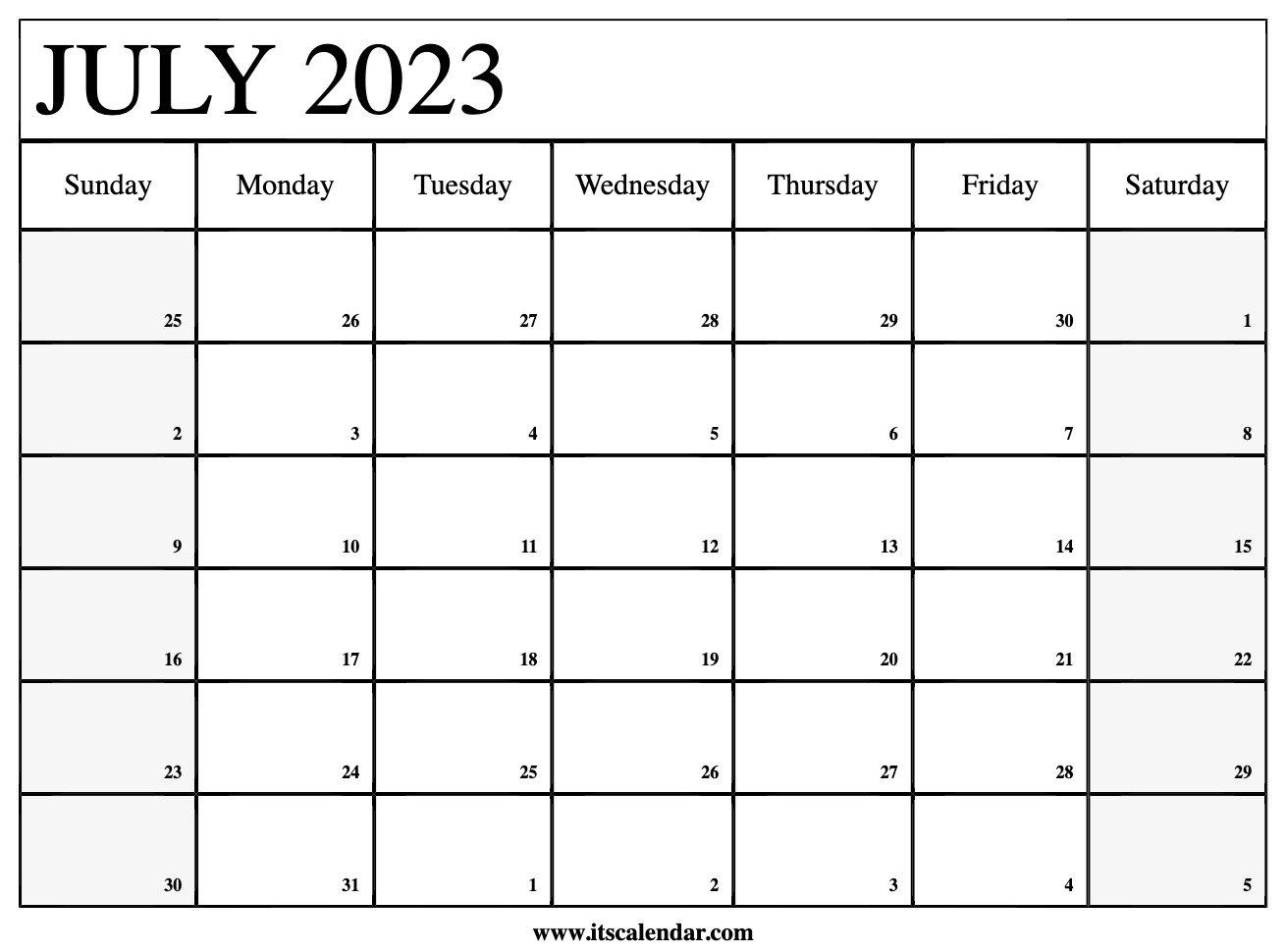 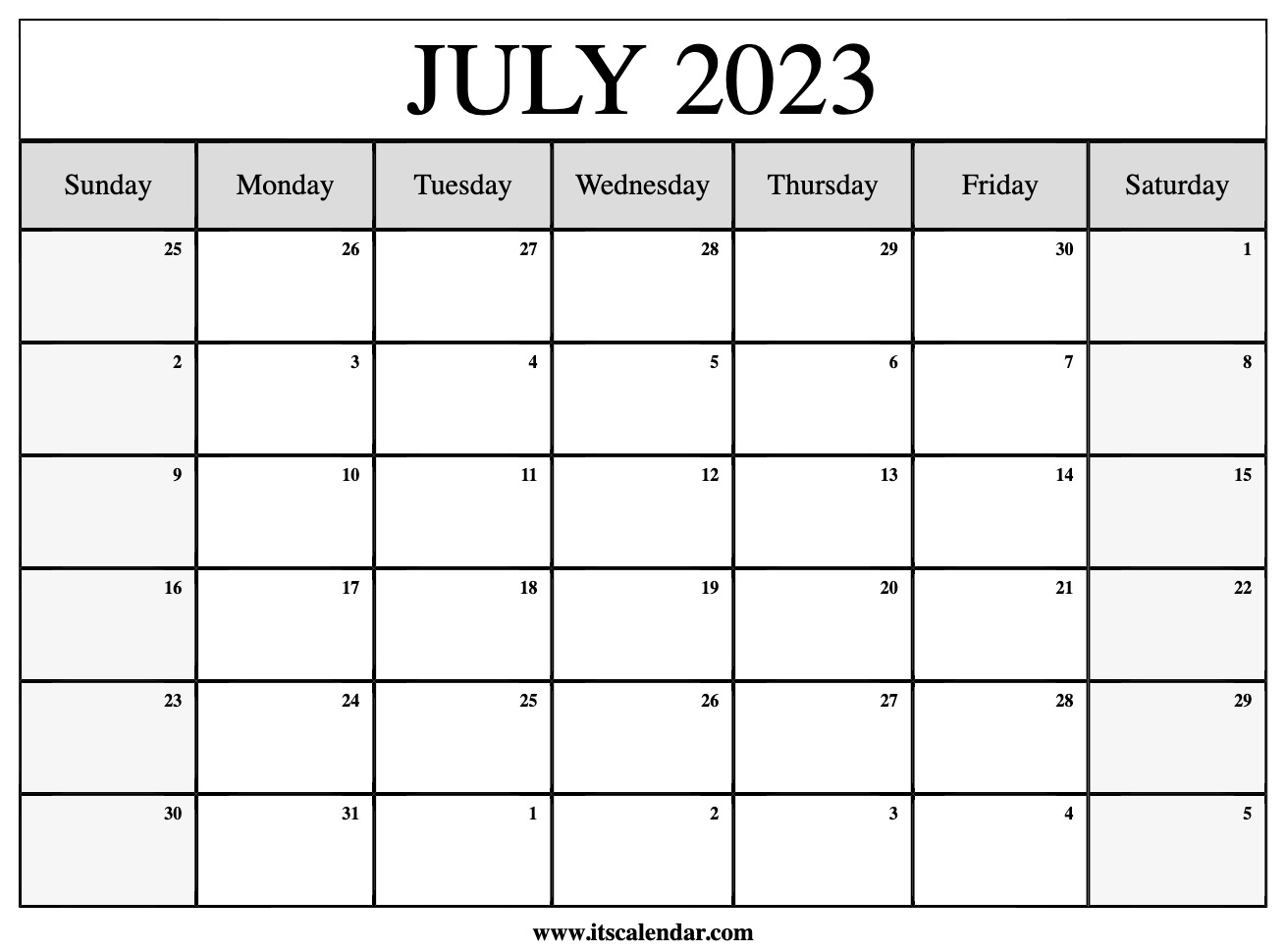 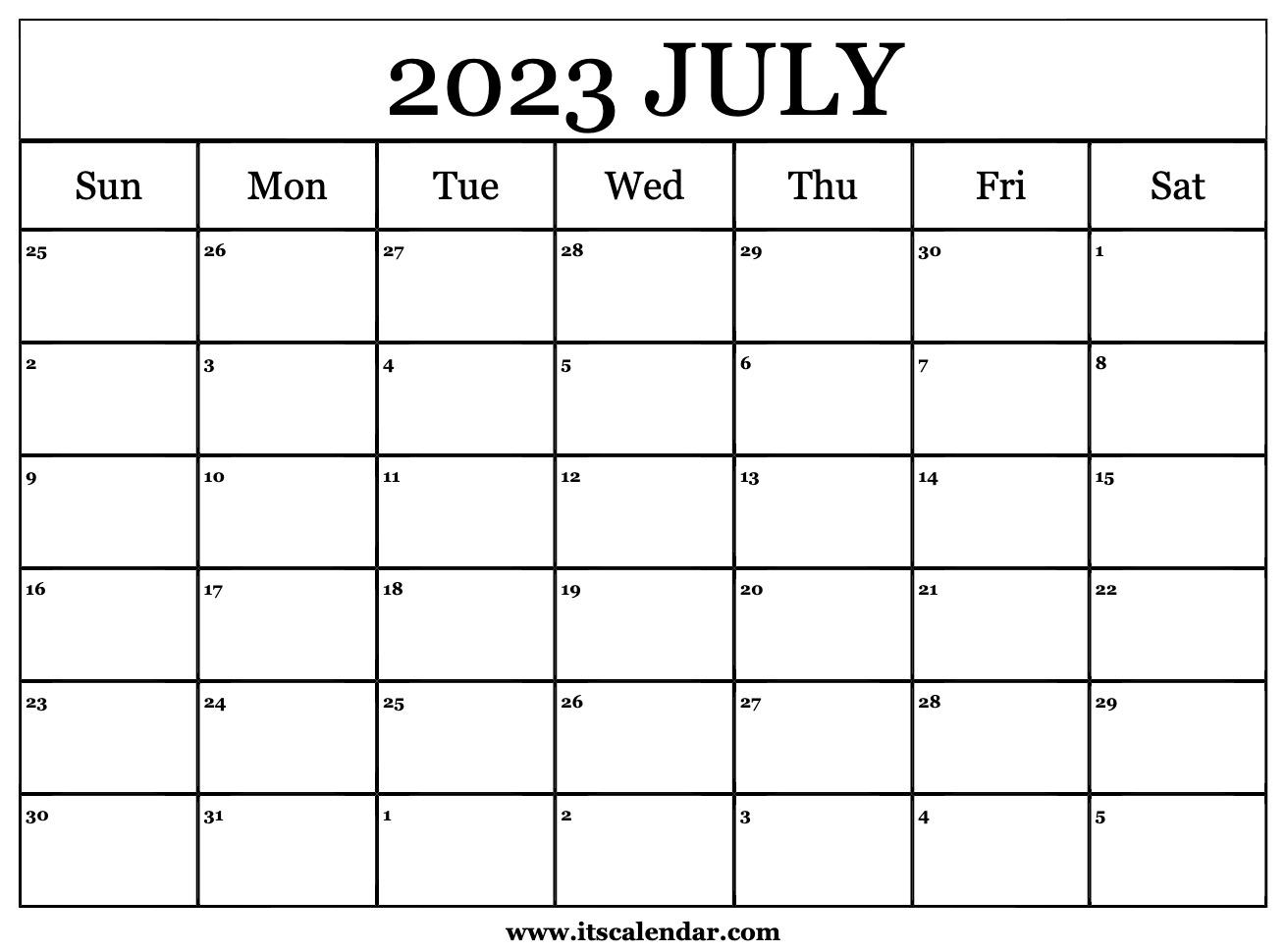 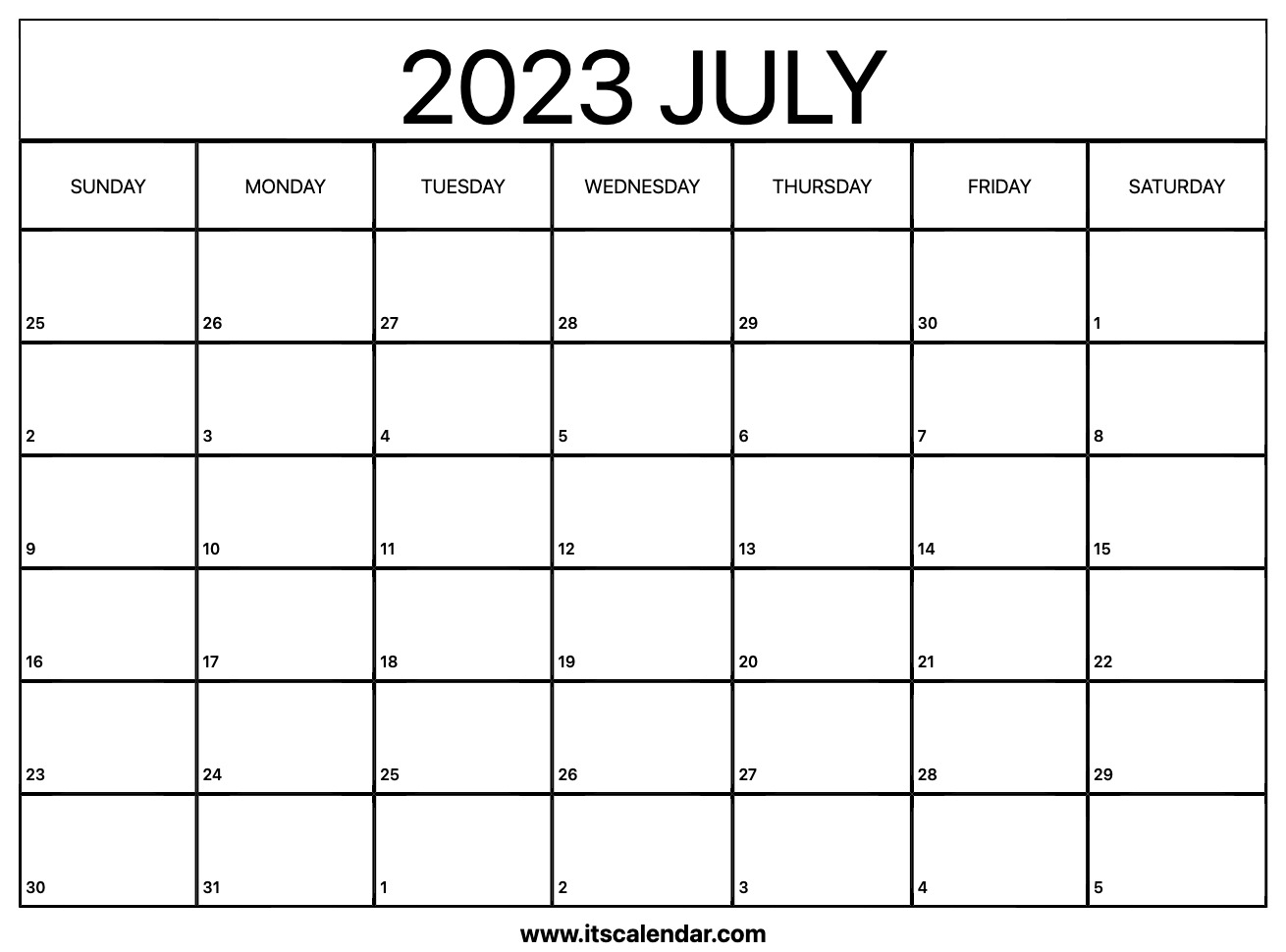