AN OVERVIEW OF THE FIRST MONTH OF THE SPRING

The name of March comes from Martius, the first month of the earliest Roman calendar. March was named after Mars, the Roman god of war. His month Martius was the beginning of the season for warfare and also the festivals held in his honor during the month. Martius remained the first month of the Roman calendar year as late as 153 BC and several religious observances in the first half of the month were originally new year's celebrations. Even in late antiquity, Roman mosaics the months sometimes still starts with March. Many cultures and religions still celebrate the beginning of the New Year in March.

In the United States, everything is changing and getting warm in March. People of the United States wait for the March like any other country citizens in Northern Hemisphere, because March brings funny days, street activities, outdoor trips, more sunless cold, and snow and of course new holiday plans.

If you would like to plan a whole month, you may do it perfectly with a Word, Excel, PDF, JPEG printable calendar. If you download a March 2022 calendar printable, you may mark all the holidays and specific days on it. To look at the whole picture is too easy with a useful and easy-to-use March 2022 calendar with holidays!

For those who like winter activities, maybe a little problem can be mentioned, but let's confess, most of us love the sun and warm air more. Spring makes us wiggle, brings us together with nature, nature smells good, looks nice, our clothes get thinner, our snow boots begin to be lifted to lockers. As we begin to experience the third month of the year, we realize that the days are going at great speed. This may sometimes cause worries and hurries. If we have postponed the decisions we have taken for the new year and we have not planned our future days yet, we desire to start planning our days immediately. But don’t worry, there is no need to thing deeply about this.

Having a printable calendar makes it too easy. Monthly custom calendars are ideal for marking all days as you wish. You can download and start to schedule a March calendar day by day. You can mark all of your important days, future celebrations, all the public and personal holidays, decisions, workout program, weekly or daily study planning and monthly goals in the blank printable calendar so that you can be much more planned. And this makes you feel relaxed, ready and happy again.

With a March 2022 calendar template, which you can download here easily, all days are waiting empty for you to plan and fill. You can easily manage your operations such as writing-drawing-deleting by downloading the brand new blank printable calendar. Using a blank March 2022 calendar will make you much more targeted and readier to move. You won't miss any special day in March so you won’t forget any birthday or anniversary with a shame. On the other hand, you don’t have to plan your activities with a March 2022 calendar template, of course, if you are managing a company or a team, you never miss any payment or meeting day by using a printable calendar. Isn’t this perfect?

Now let's take a closer look at this first month of the spring season.

MARCH EVENTS IN THE UNITED STATES

Shrove Tuesday is the day before Lent starts on 'Ash Wednesday'. The name Shrove comes from the old English word 'Shriven' which means to have a confession to say sorry for the wrong things you have done. Lent always starts on a Wednesday, so people went to confessions on the day before. Because of it, this day became more famous as Shriven Tuesday and then Shrove Tuesday.

The other alternative name for this day, Pancake Day, comes from the old English custom of using up all the fattening ingredients in the house before Lent so that people were ready to fast during Lent. The fattening ingredients that most people had in their houses in those days were eggs, flour, and milk. Everybody knows that there is a very simple recipe to use these ingredients was to mix them and cook for making pancakes!

This year the Shrove Tuesday is in 5th of March and don't forget to mark this day after downloading your March 2022 calendar template!

The Mardi Gras in the United States is not a national public holiday throughout the country, but in some cities and regions in the US important Carnival celebrations are held.

In most cities, the Mardi Gras celebrations arise from French, Spanish and other colonial influences.

The oldest Carnival celebrations in North America took place on the western bank of the Mississippi River, less than 60 miles from where New Orleans was today. This Mardi Gras was held on March 3, 1699, and to this day, 38-year-old Frenchman Pierre Le Moyne named this point near Fort Jackson as Point Du Mardi Gras (Mardi Gras Point).

The first organized carnival celebrations took place in Mobile, Biloxi, New Orleans, and Pensacola, each with a distinct tradition.

Modern Mardi Gras activities vary from city to city in the United States.

St Patrick is one of Ireland's patron saints, and every year on March 17, many Americans with Irish ancestry remember him. Patrick's Day is fixed on March 17, but may occasionally be moved by Catholic Church authorities.

The most common St Patrick's Day symbol is the shamrock. The shamrock is the leaf of the clover plant and a symbol of the Holy Trinity. Other symbols include almost anything green, the green, orange and white flag of the Republic of Ireland and brands of beer associated with Irish culture.

Religious symbols include snakes and serpents. Other common symbols seen on St Patrick’s Day include the harp, which was used in Ireland for centuries, as well as the leprechaun and a pot of gold that it hides.

If you don’t want to miss this event, mark the day of 17th of March on your printable calendar.

National Vietnam War Veterans Day is observed every year on March 29 and is a special day to thank and honor the nation’s Vietnam veterans and their families for their service and sacrifice.

On March 28, 2017, President Donald J. Trump signed the Vietnam War Veterans Recognition Act of 2017. This act officially recognizes March 29 as National Vietnam War Veterans Day. This important Act also includes the day among those days on which the US flag should especially be displayed.

On March 29, 2012, President Barack Obama proclaimed this specific day as Vietnam Veterans Day. The proclamation called "upon all Americans to observe this day with appropriate programs, ceremonies, and activities that commemorate the 50th anniversary of the Vietnam War."

Women’s Day has been firstly celebrated on February 28, 1909, and from last 100 years has been being celebrated on every 8th March. The Women’s day was initially observed to fight against the unjust condition of women in the garment industry. This day in the United States is devoted to honoring the achievement and rights of women across the world.

Different from other days like Mother’s Day and Valentine’s Day, in Women's Day, we celebrate women in all forms: moms, grandmas, wives, sisters, daughters, teachers or bosses. All of us have at least one woman in our lives who turns our lives to a garden of flowers. And this special day is a great way to thank and celebrate them for their beautiful and strong existences. Do not forget to put a sign on 8th of March on your March 2022 calendar template to remember all the precious women in your whole life and celebrate the ones who are still around you.

Would you like to take a look at the major March events in history before you filled out your own March 2022 calendar template with events that are important to you? 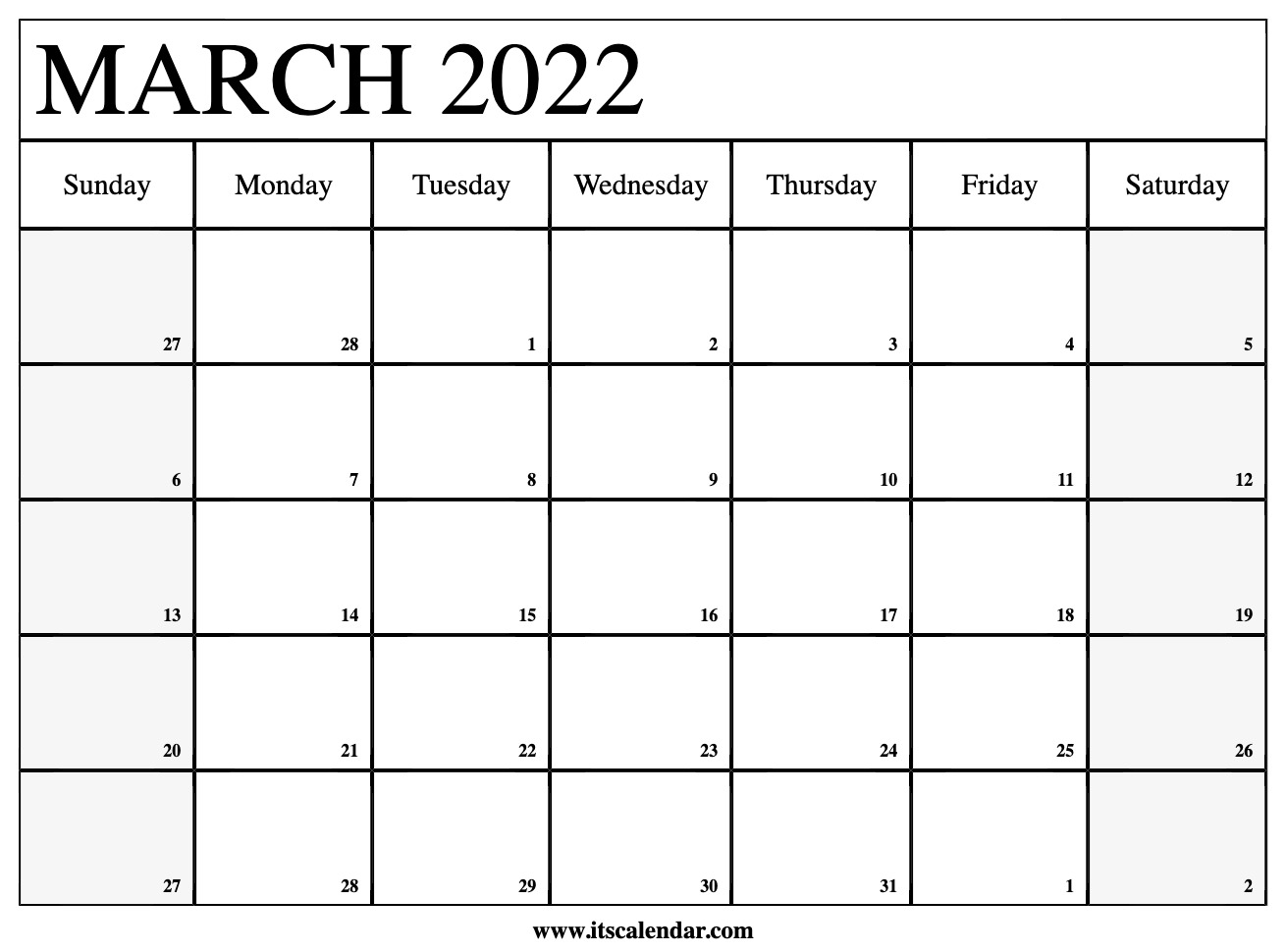 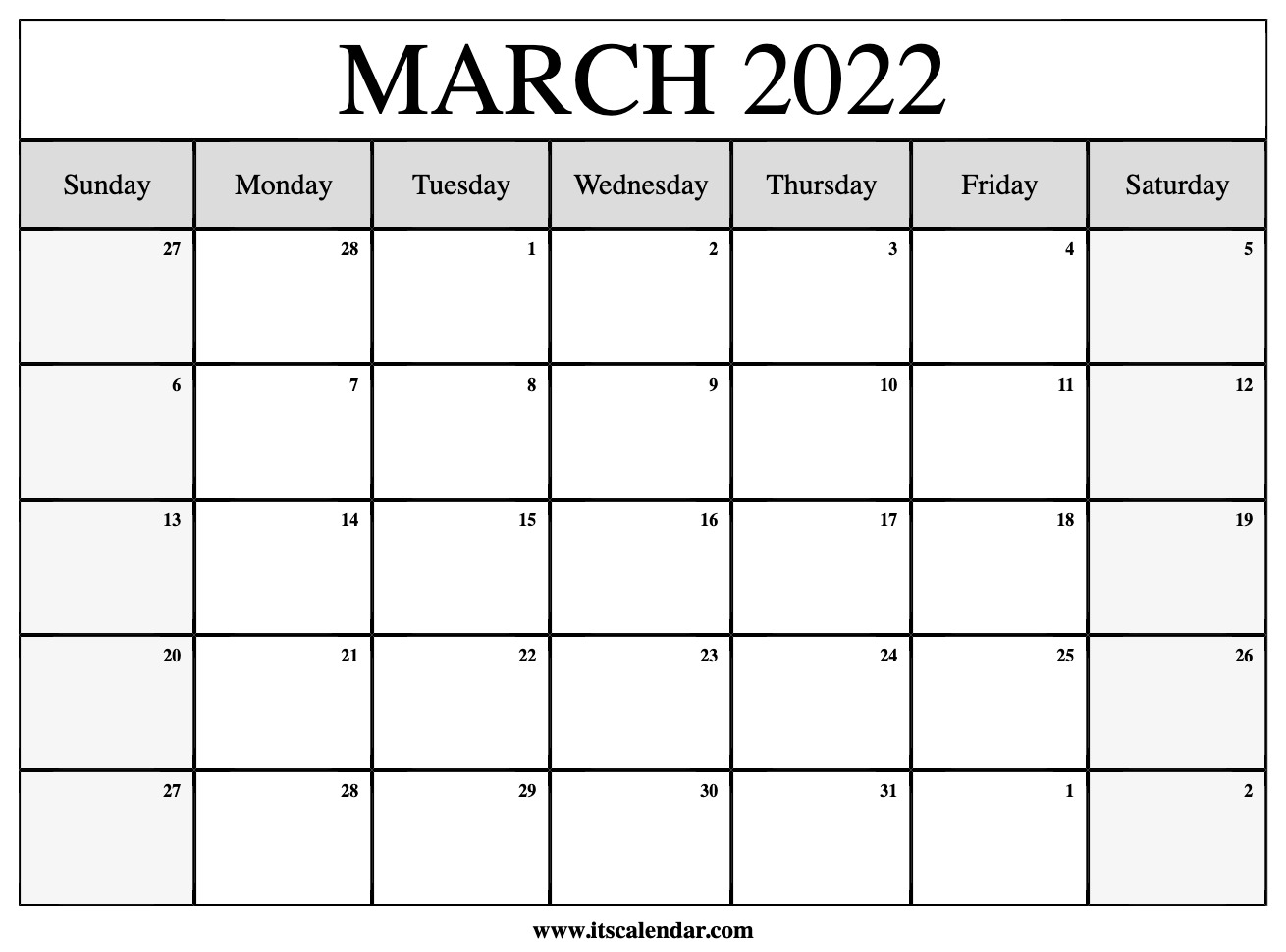 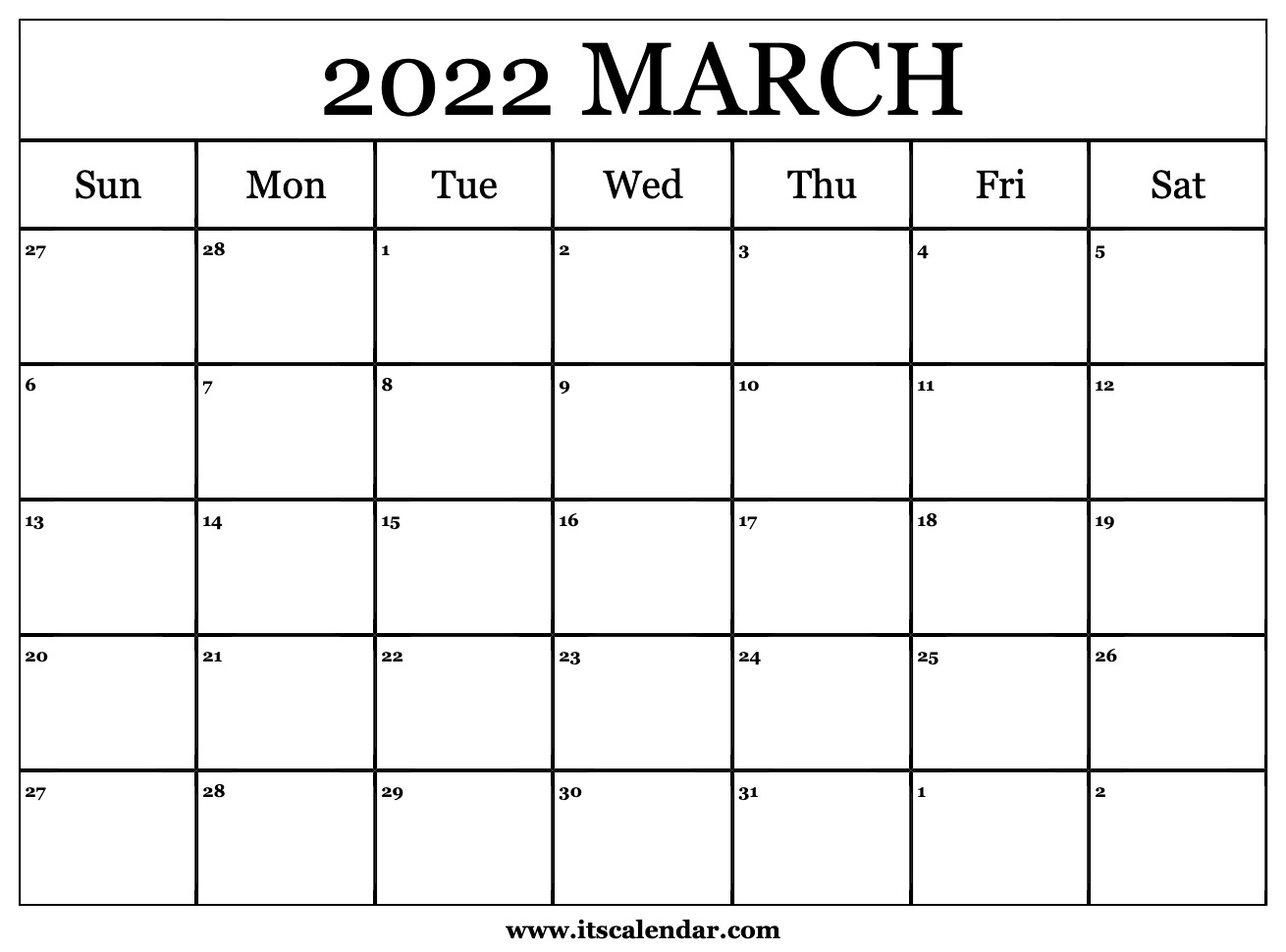 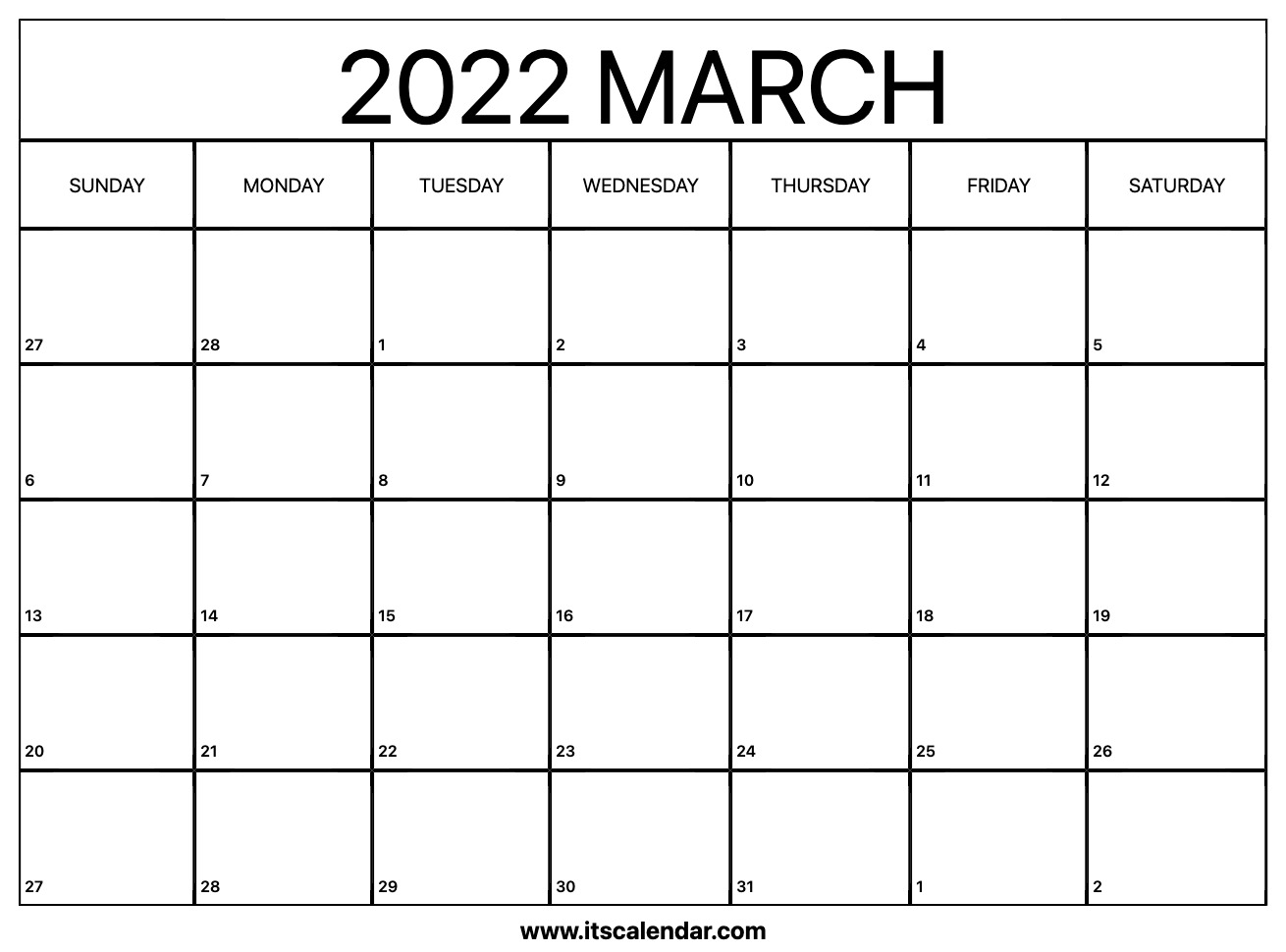