AN OVERVIEW OF THE MONTH OF YELLOW LEAVES

October is the tenth month of the year in the both Julian and Gregorian Calendars and it is the sixth of seven months which have a length of 31 days. October was the eighth month in the old Roman calendar and its name came from Latin "octo" means "eight". After January and February were inserted into the calendar that had originally been created by the Romans, the name of October remained the same. October is the second month of autumn in Northern Hemisphere. And it is second month of spring in the Southern hemisphere.

For some, October is still considered part of the summer. Because air temperatures still do not fall too much, t-shirt-shorts or even the bikini season has not yet ended. Moreover, the holiday destinations, which are crammed in summer, will calm down in October. You can enjoy the sea, the sun, the bars and the nature more comfortably without being in the crowd. October also offers all the beautiful pastel colors of autumn. Natural landscapes of yellow, orange, red reveal wonderful photo frames. A mass that only likes to do autumn photography is impatiently waiting for October. Because the heart of autumn is October. October also has a special meaning for farmers. Because October is the month of sowing the crops. Earth, air temperature and rains full of nutrients create a great environment for seeds to hold on to the soil. In short, October is the first step towards new lives for plants.

Now let's take a closer look at this most “autumnal” month

Columbus Day, which is on the second Monday of October each year, commemorates Christopher Columbus' arrival to the Americas on October 12, 1492.

Columbus Day is a public holiday in many parts of the United states. Some government offices are closed because Columbus Day is still a federal government holiday, however the day is a legal observance in states like Florida. Many businesses and shops are open in states that don't have Columbus Day as a public holiday. Schools are not required to close but it is needed to check with the school districts or school calendars on Columbus Day school holiday closures. The same goes for post offices, in order to be sure that they are open or not, you can check it with your local post office.

Christopher Columbus is accepted as the first European to sail to the Americas. He is also sometimes portrayed as the explorer of the New World. However, there is also evidence that the first Europeans to sail across the Atlantic were Viking explorers from Scandinavia. In addition, the land was already populated by indigenous peoples, who had 'discovered' the Americas thousands of years before.

Columbus Day was first held in San Francisco in 1869. The first state-wide celebration was held in Colorado in 1907. In 1937, Columbus Day become a holiday across the United States. Since 1971, it has been celebrated on the second Monday in October. The date on which Columbus arrived in the Americas is also celebrated as the Dia de la Raza (Day of the Race) in Latin America and in some Latino communities in the USA.

OCTOBER EVENTS IN THE UNITED STATES

World Teachers' Day, also known as International Teachers Day, is celebrated every year on October 5. It aims to focus on appreciating, assessing and improving the educators of the world and to provide an opportunity to consider different problems related to teachers and teaching.

UNESCO and Education International (EI) organize a campaign each year in World Teachers' Day, to try to provide understanding of teachers and the role they play in the development of students and society in overall.

They get the support of the private sector such as media organizations to reach this aim. Those campaigns focus on different themes for every year. For instance, the theme for 2017 was "Empowering Teachers”. That was the year of commemoration of 20th anniversary of the 1997 UNESCO Recommendation concerning the Status of Higher-Education Teaching Personnel.

If you want to remember the importance of the teachers in your life and maybe to call some of them to thank, you can put a mark on this day on your October 2023 calendar printable in order not to miss the date!

Some families carve 'scary' faces in pumpkins or other vegetables and use it for decoration of their homes and gardens in Halloween style. These were traditionally intended to ward off evil spirits. If you are at home on Halloween, do not forget to have a bowl of small presents or sweets to offer to anyone who knocks on your door. This will help you to satisfy the little spirits in your neighborhood!

United Nations International Children's Emergency Fund (UNICEF) collects donations in Halloween. As children trick-or-treat on Halloween night, some of them might carry small cardboard boxes with the UNICEF logo on them and collect coins instead of the usual candy. The collected money is then given to UNICEF and used to help needy little children worldwide.

Halloween is not an official holiday. Government offices and businesses are open as usual and public transit services run on regular schedules. But it is necessary to say that, if you drive around in late afternoon or evening, it is important to be careful for children who are being out on the street after dark. Because they may wear dark costumes or masks and cannot be noticed as easy as any other times in year. They may also play hide and seek between vehicles or behind bushes. Halloween belongs to them mostly, so they become right whatever they do :)

There are various symbols related with Halloween. These include the spooks, ghosts and walking skeletons that represent the contact between the spiritual and physical world. Also, witches and wizards are other symbols because they are accepted to have the power to contact the spirit world. Furthermore, bats, black cats and spiders are often associated with this holiday. These animals are connected with the night and darkness which are the other widely-accepted horror items.

There are also a range of objects using in Halloween. These are mostly blood, fire, gravestones, pumpkins, bones and skulls. As you see, they all have connections with death, the spirit world or protecting property from evil spirits. Many of these objects are available in stores as decorations for the Halloween season.

The commercialization of Halloween started in the 1900s, when postcards and die-cut paper decorations were firstly produced for the celebrations. Halloween costumes started to appear in stores in the 1930s and the tradition of 'trick-or-treat' appeared in the 1950s. The range of Halloween products increased with time. Now Halloween is a very profitable holiday for the manufacturers of costumes, make-up brands, yard decorations and candy companies.

Halloween is one of the most enjoyable festivals celebrated all around the country. Book the date on your blank October 2023 calendar for avoiding to miss the celebrations, although we are sure that you won’t!

World Food Day is celebrated around the world on 16 October each year to honor of the establishing of the Food and Agriculture Organization of the United Nations in 1945. This day is celebrated widely by many other organizations concerned with food security, including the World Food Programme and the International Fund for Agricultural Development.

World Food Day was established in November 1979 by FAO's Member Countries at the Organization's 20th General Conference. The Hungarian Delegation, led by the former Hungarian Minister of Agriculture and Food Dr. Pál Romány, played an active role at the 20th Session of the FAO Conference by suggesting the idea of celebrating the World Food Day worldwide.

It has since been observed every year in more than 150 countries, raising awareness of the problems behind poverty and hunger. For the World Food Day, it is designated a different theme for each year since 1981 to highlight the fields in need of action and provide a common focus.

In order to contribute the awareness on issues behind the poverty and hunger, don't forget to mark this day on your PDF, JPEG, Word, Excel printable calendar!

Here we listed the major October events in history. You can check it before you filled out your own October 2023 calendar template with events that are important to you? 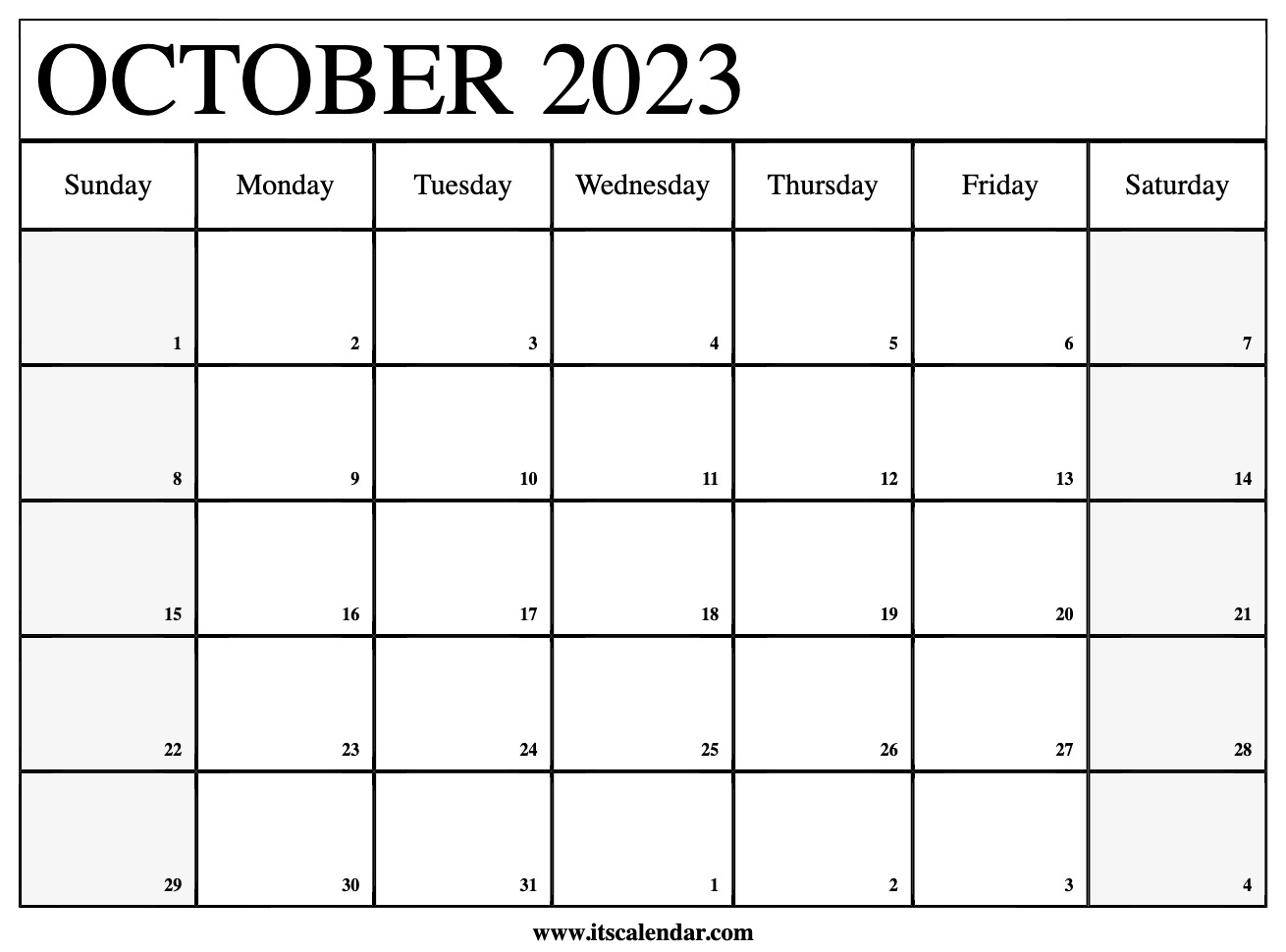 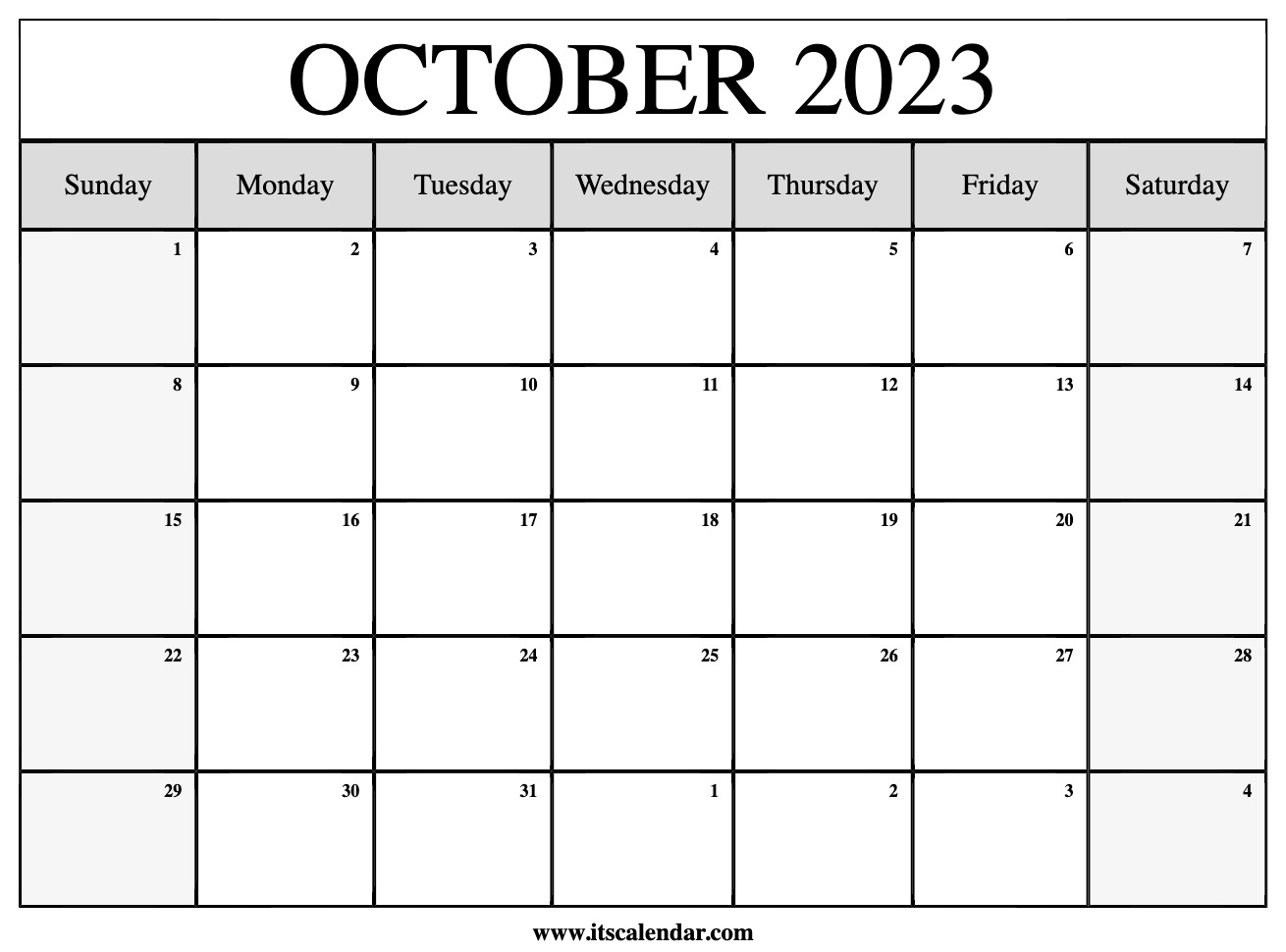 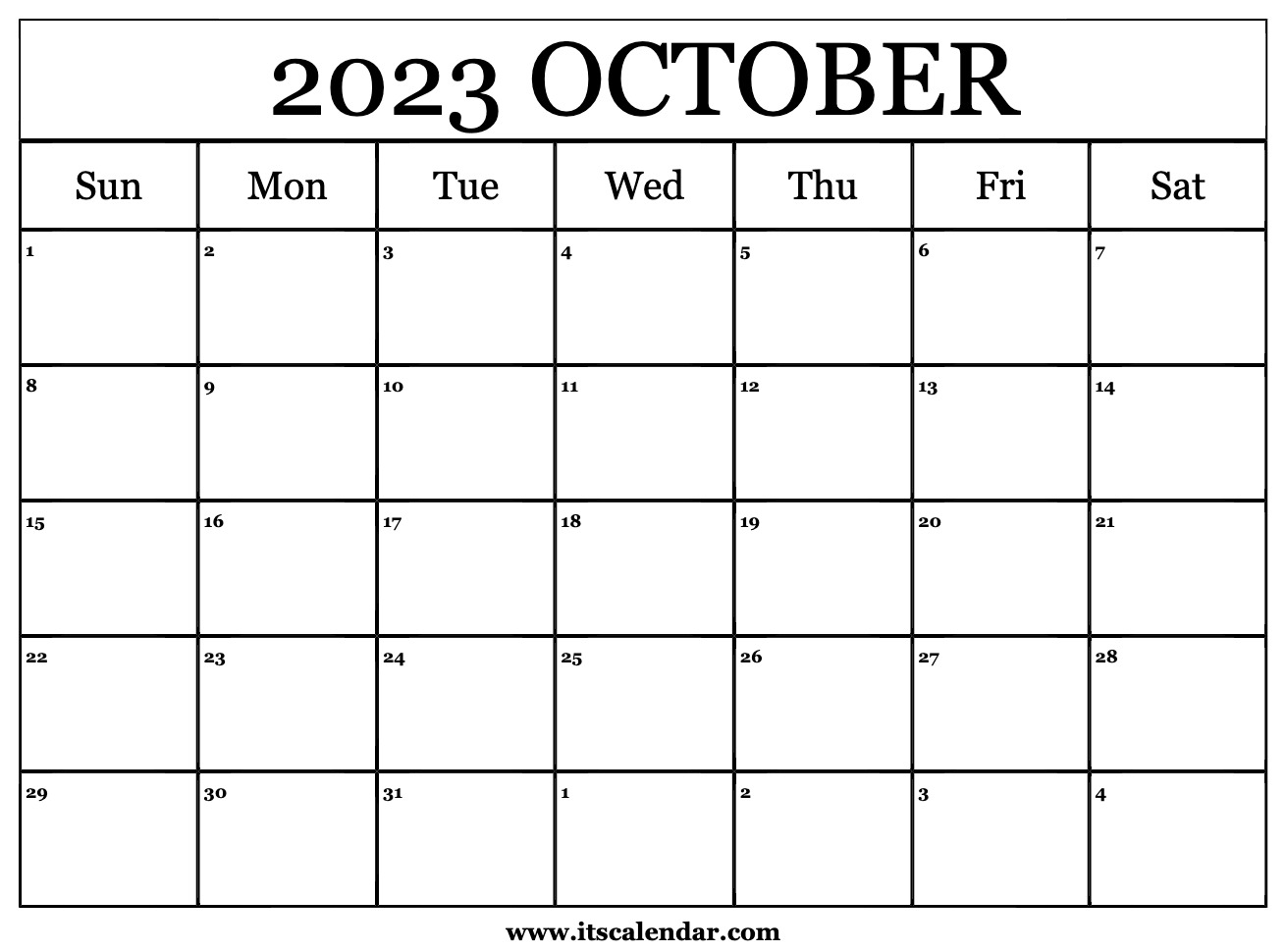 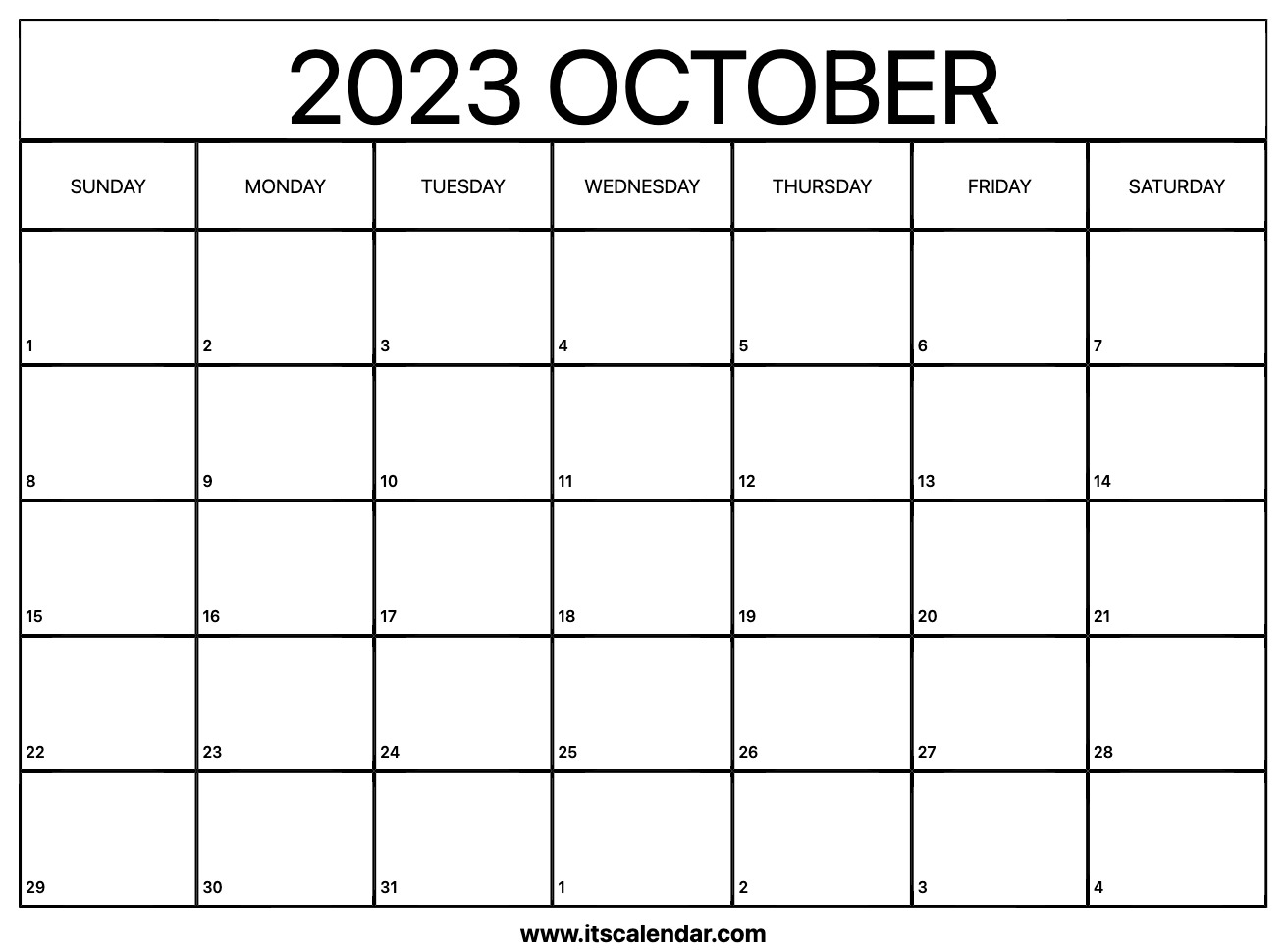