AN OVERVIEW OF THE LAST MONTH OF THE FALL

November is the eleventh month of the year in the both Julian and Gregorian Calendars, the fourth and last of four months to have a length of 30 days, and the fifth and last of five months to have a length of less than 31 days. November was the ninth month of the ancient Roman calendar. And its name came from the Latin word "novem" meaning "nine".  When January and February were added to the Roman calendar, the name of November didn't change. November is a month of late spring in the Southern Hemisphere and late autumn in the Northern Hemisphere. Therefore, November in the Southern Hemisphere is the seasonal equivalent of May in the Northern Hemisphere.

November is the time when the cold weather begins, the dream of autumn ends, the fairy tale image of the winter is at the door. The sweet autumn breeze of October is now replaced by cold dresses. Although the sun reminded itself of an occasional appearance, November means cloudy, closed and rainy weather. Of course, this is pretty romantic for some! November is also the month of celebrations, Christmas preparations, shopping and winter welcome. December, the first month of winter starts to feel its presence in the last days of November. Thick clothes come out of the cupboards, heaters start to burn, home repairs are done to prepare for the adverse weather conditions of the winter season. We are sure that you have a lot to do in November. Celebrations, thanksgiving invitations and shopping will fill your time enough. So, get a blank November 2023 calendar. You will see a lot of benefits. If you have a online calendar, you can plan all November easily. Whether you're working, being a student, being a housewife, being a teenager or being old, it's a good idea to be planned with a JPEG, PDF, Word, Excel printable calendar!

November will be the harbinger of a beautiful winter season for you. Now that the hot weather is over, enjoy the cold weather, snow, Christmas, lights, house parties, cinema nights, coffee and blanket until spring and summer come back! If you have things to do before the end of the year or if you have things to finish, you can easily manage everything by using the November 2023 calendar printable. Be sure, you'll be very proud of yourself for being planned and targeted with a November 2023 calendar template!

Now let's take a closer look at the “winter is coming” month!

NOVEMBER HOLIDAYS IN THE UNITED STATES

Veterans Day (originally known as Armistice Day) is an official public holiday in United States, celebrated annually on November 11. The aim of is day is to honor military veterans, persons who have served in the United States Armed Forces. The aim is the same with other holidays including Armistice Day and Remembrance Day which are observed in other countries that commemorate the anniversary of the end of World War I.

Major hostilities of World War I were formally ended at the 11th hour of the 11th day of the 11th month of 1918, when the Armistice with Germany went into operation. After the request of major U.S. veteran organizations, Armistice Day's name was changes as Veterans Day in 1954.

Because it is a federal holiday, some American workers and many students have day off from work or school. When Veterans Day falls on a Saturday, the preceding Friday may be designated as the holiday, whereas if it falls on a Sunday it is observed on the following Monday.

In the Veterans Day, non-essential federal government offices are closed. No mail is delivered and all federal workers are paid for the holiday.

Veterans Day is held to honor and thank all military personnel particularly living veterans who served the United States in all wars. The observations include the parades, church services and a period of silence lasting two minutes held at 11am. In many places, the American flag is hung at half-mast.

If you want to be part of the parades and the other observances in the Veterans’ Day, you may use your November 2023 calendar with holidays to remember the date before it comes.

Thanksgiving is a national holiday in the United States an it is celebrated annually on the fourth Thursday of November. It firstly originated as a harvest festival. Thanksgiving has been celebrated nationally since 1789, after a proclamation by George Washington as a request by Congress.

Thanksgiving celebrations were intermittent until the presidency of Abraham Lincoln, when Thanksgiving became a federal holiday in 1863, during the American Civil War. Lincoln proclaimed that the last Thursday in November will be a national day of "Thanksgiving and Praise to our beneficent Father who dwelleth in the Heavens," to be celebrated. President Franklin D. Roosevelt made a little the date change that the date fixed as the fourth Thursday in November. Together with Christmas and the New Year, Thanksgiving is a part of the broader fall–winter holiday season in the U.S.

The event that Americans call the "First Thanksgiving" was celebrated by the Pilgrims after their first harvest in the New World in October 1621. This feast lasted three days, and as the declaration of the attendee Edward Winslow, it was attended by 90 Native Americans and 53 Pilgrims.

Thanksgiving Day is a public holiday. It is a day off for the general population and schools, banks, post offices and most businesses are closed. Thanksgiving Day is a day for people in the United States to give thanks for basically what they have. Families and friends get together for a meal, which traditionally includes a roast turkey, stuffing, potatoes, vegetables, cranberry sauce and pumpkin pie. In some cities and towns in US, there are parades during the Thanksgiving weekend. In most areas, these festivities also mean the opening of the Christmas shopping season.

Thanksgiving Day is a great chance to be aware and thank to all of we have in our lives. You will have the mark on your November 2023 calendar template so it is enough to look at your calendar to get prepared for the date!

NOVEMBER EVENTS IN THE UNITED STATES

Black Friday is called the first Friday after Thanksgiving. The day is considered the beginning of the Christmas shopping season since 1932. On Black Friday, the stores open very early in the morning and are late closing and unexpectedly discounted. Black Friday is not a public holiday. There are also Black Friday days in Canada and the UK, and several companies doing business on the Internet, such as the Amazon, also sell discount.

It was first mentioned in 1961 in the newspapers Black Friday. The reason why it is called black is the heavy traffic and difficulties that are caused by shopping in Philadelphia on that day. In recent years, Black Friday has been met positively for both people and stores. Famous stores such as Walmart open their doors to their customers earlier each year, and the work of the workers is more intense.

The New York City Marathon is an annual marathon (42.195 km) that courses through the five boroughs of New York City.

It is the largest marathon in the world, with 52,812 finishers in 2018 and 98,247 applicants for the 2017 race. The New York City Marathon is among the pre-eminent long-distance annual running events in the United States along with the Boston Marathon and Chicago Marathon. And it is accepted one of the World Marathon Majors.

The race is organized by New York Road Runners and it has been run every year since 1970. Only one exception was the race of 2012, when it was cancelled due to the landfall of Hurricane Sandy.

In past years, New York City Marathon has been sponsored by the financial group ING. In 2014, Tata Consultancy Services, a multinational information technology service, consulting, and business solutions company headquartered in India, began an eight-year term as the title sponsor.

Daylight saving time in the United States is the practice of setting the clock forward by one hour during the warmer part of the year, so that evenings have more daylight and mornings have less.

The Uniform Time Act of 1966 established the system of uniform Daylight-Saving Time throughout the US and most areas of the United States observe daylight saving time.

In the U.S., daylight saving time starts on the second Sunday in March and ends on the first Sunday in November, with the time changes taking place at 2:00 a.m. local time. With a mnemonic word play referring to seasons, clocks "spring forward, fall back"—that is, in springtime the clocks are moved forward from 2:00 a.m. to 3:00 a.m. and in fall they are moved back from 2:00 a.m. to 1:00 a.m. Daylight saving time lasts for a total of 34 weeks (238 days) every year, about 65% of the entire year.

For not forgetting to set back you clock to one hour ago in 3rd of November, mark this day on your printable calendar and enjoy sleeping one hour more!

You may find here some of the important November events in history and then you can fill your own blank November 2023 calendar with events that are important to you.

November 2, 1957 – Laika the dog launched into orbit as the first animal in space on board Sputnik 2.

November 9, 1960 - Senator John F Kennedy wins the election for the 35th president of the United States.

November 30, 1979 - Pink Floyd releases "The Wall" which is one of the most imaginative albums in the history of rock music. 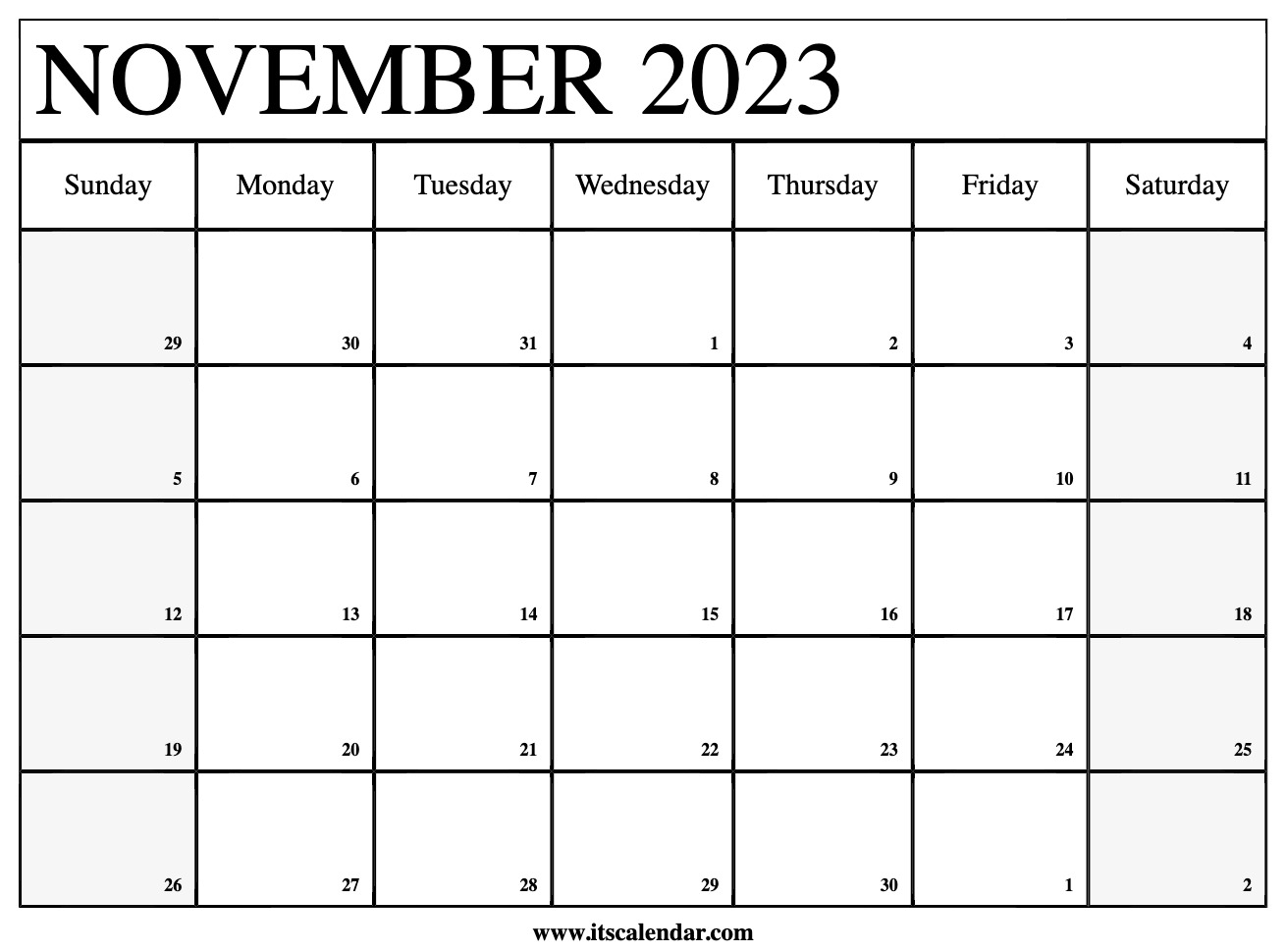 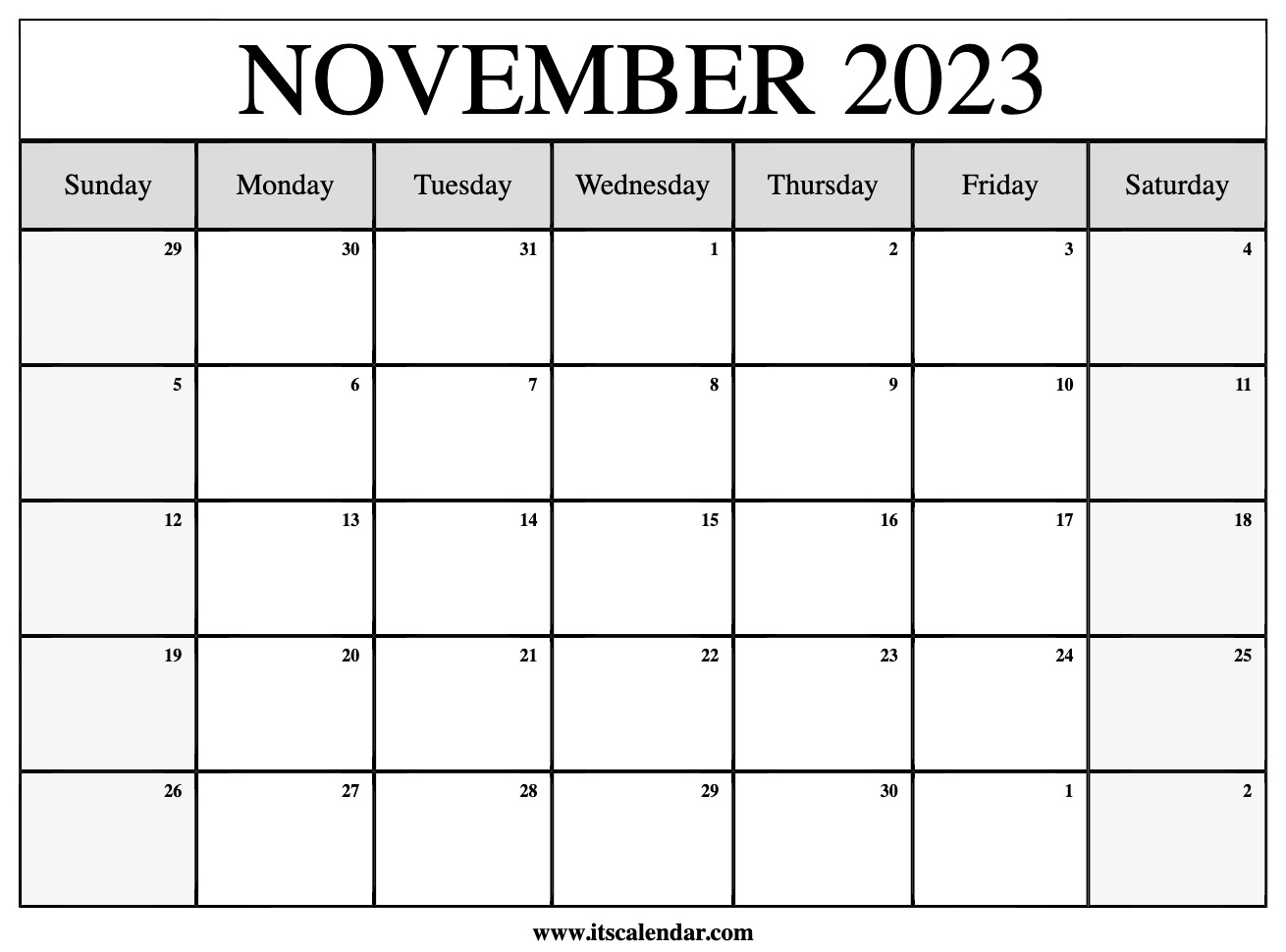 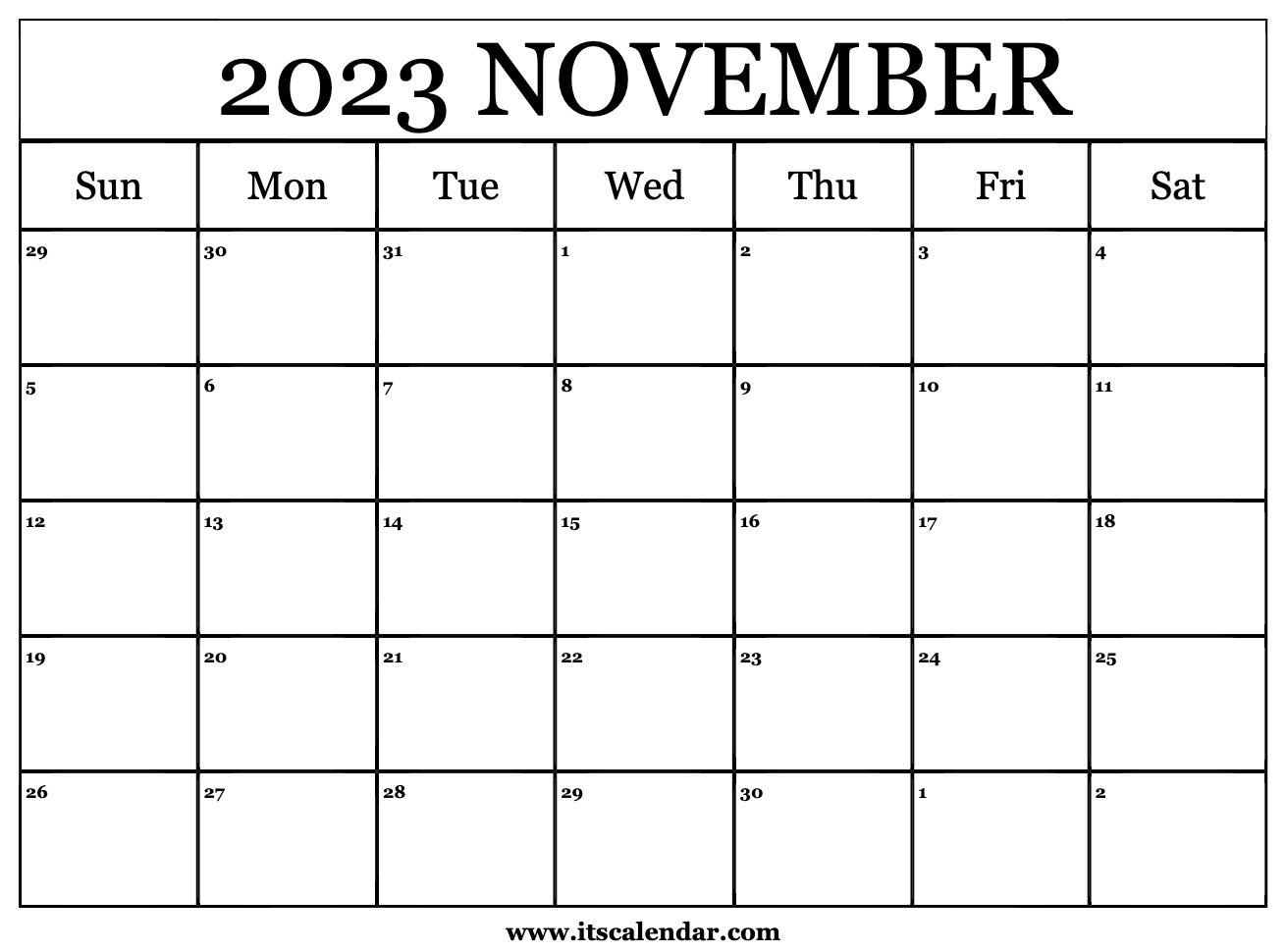 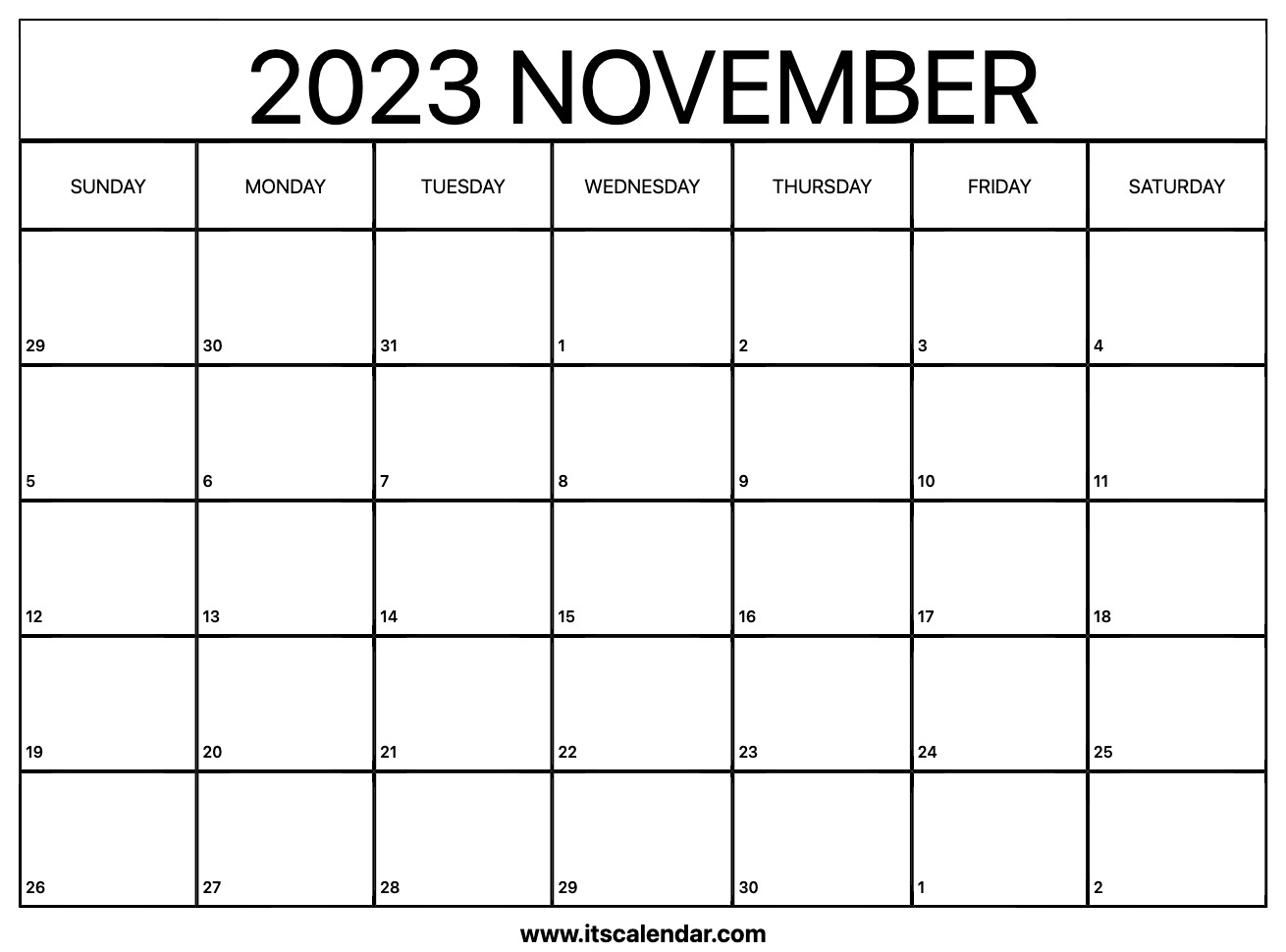