AN OVERVIEW OF THE MONTH OF BRIDGE BETWEEN SPRING AND SUMMER

May is the fifth month of the year in both Julian and Gregorian Calendars and it is the third of seven months to have a length of 31 days.

May is a month of spring in the Northern Hemisphere and autumn in the Southern Hemisphere. Late May means the start of the summer season in the United States. “Sea and Sun” season says hi in May.

During this period, you may need a calendar more than ever. So, get a PDF, Word, Excel, JPEG printable calendar without wasting time. Fast times are starting, everything needs to be under your control. Download your May 2022 calendar printable, print it -if you want- and start using it. It's that easy!

In May, (in the Northern Hemisphere of course), the temperature of the air increases considerably. People begin to prepare themselves for the summer months. May is especially suitable for weekend or holiday plans, which include exploration new destinations by trekking and ample walking. Because the temperature is not disturbing. Strawberries appear everywhere, t-shirts-without-jackets stylings begin. The weather becomes warm and sunny, although it is not very stable.

In May the school almost ends, summer dreams begin. In workplaces, the pace of work slows down a little bit, smiling faces appear all around, first annual leave is usually taken in May, holiday and accommodation place photos begin to appear on computer screens.

When planning these holidays, you need a clean, useful, printable calendar template to avoid getting lost. In May, almost every day is full of activity, especially if there are special days to remember, such as birthdays, weddings and anniversaries, it becomes harder to keep everything in mind. In order to avoid such a situation, all you have to do is to be calm and download a blank May 2022 calendar. May 2022 calendar template is great for planning all days individually. With a May 2022 calendar with holidays showing all holidays, you don't need to look at the other calendars or apps to find holidays over and over again.

Now let's take a closer look at this month heralding start of summer!

MAY HOLIDAYS IN THE UNITED STATES

Memorial Day, originally called Decoration Day, is a day of remembrance for those who died while doing their military service for the United States.

Many cities began commemorating the Memorial Day in May 1966, although President Lyndon Johnson officially announced that Waterloo NYC as the birthplace of Memorial Day.

Although there was an uncertainty about the origin of the day, it was first announced on May 30, 1868 by General John Logan, the national commander of the Republican Great Army. The first official observation included placing flowers at the graves of the Union and Confederate soldiers at Arlington National Cemetery.

This important day was recognized by all northern states until 1890. The south refused to accept the day until after World War II (until the extent of the Memorial Day only changed to honor the Americans who died in any war from the honor of those who died in the Civil War).

The Memorial Day became official on May 30, 1971 with the addition of the article to the National Holiday Act saying the Memorial Day will be celebrated annually on the last Monday of May.

On Memorial Day, observances are organized at military graveyards, cemeteries and memorials, and military themed parades are held all around the country. This holiday is also associated with the Indianapolis 500 car race which is held on the Sunday, one day before Memorial Day.

The poppy, which is the traditional symbol of America in terms of war losses, is also important for the Memorial Day. As a modern symbol of our day, the origins of the red poppies were the idea of Mrs Moina Michael, who was actually an American woman. In war-torn battlefields, the red-field poppy (poppy rhoeas) was one of the first growing plants. Seeds spread easily in the wind and settled in the soil, only when the ground moved to begin to germinate. Same as during World War I.

The iconic poppy flower was inspired by the poem "In Flanders Fields" written in 1915 by Canadian soldier John McCrae. As he wrote the poem, he saw poppies in the tombs around the artillery brigade in Belgium.

Today, the poppy is a symbol of both revival and loss of life, supporting both physically and emotionally damaged soldiers.

Make sure you have a place on your printable calendar to attend commemorations and events organized on this important day.

MAY EVENTS IN THE UNITED STATES

Mother's Day is a celebration that honors mothers in every family, as well as the mother's sacrifice, importance and impact on society. It is celebrated on the second Sunday of May and is not a public holiday.

Mother's Day was first celebrated in 1908 when Anna Jarvis organized a memorial service to her mother at the St. Andrew's Methodist Church in Grafton, West Virginia. St. Andrew's Methodist Church now has the title of being an important place for this important day. The campaign to accept Mother's Day as a nationwide special day began in 1905, when her mother Ann Reeves Jarvis died.

Ann Jarvis was a peace activist looking after wounded soldiers on both sides of the American Civil War and creating Mother's Day Working Clubs to address public health issues.

Anna Jarvis wanted to set a day to honor all the mothers, because she believed that a mother was doing more for you than anyone else in the world.

The modern version of Mother's Day, derived from the United States, was criticized for over-commercialization. The founder, Jarvis, regretted this trade and voiced his opinion that it was never his intention.

Be sure to mark this day on your calendar to remember your mother and be with her after having a May 2022 calendar template!

Cinco de Mayo, or the fifth of May, is a holiday that celebrates the date of the Mexican army’s victory over France at the Battle of Puebla during the Franco-Mexican War in 1862. Cinco de Mayo 2022 occurs on Thursday, May 5.

In the United States Cinco de Mayo has evolved into a commemoration of Mexican culture and heritage, particularly in areas with large Mexican-American populations. This is a day for living the colorful culture of Mexico.

Today, holidays are celebrated in some parts of Mexico and throughout the US, especially in cities with large Latin populations. Among the festivals, parades, carnivals and Mexican food, music and of course one of our favorite Mexican tastes: tequila.

Mark the fifth day of May on your blank May 2022 calendar and have a great day while celebrating this holiday.

It was with the idea for citizens to come together and thank our military members for their patriotic service in support of our country. So that President Harry S. Truman led the effort to establish this single holiday to make it periodically and more grandiosely.

The one-day celebration then stemmed from the unification of the Armed Forces under the Department of Defense. When the date was August 31, 1949, Secretary of Defense Louis Johnson announced the creation of an Armed Forces Day to gather separate Army, Navy, Marine Corps, U.S. Coast Guard and Air Force Days.

In order to celebrate the first Armed Forces Day on May 20, 1950, parades, receptions and air shows were organized.

One of the most glamorous moments of the festival is the weekend of the parade and is definitely not to be missed. If you would like to experience this year's parade, don't forget to put a sign on your printable calendar for this day!

Would you like to know some of the major May events in history before you filled out your own May 2022 calendar template with events that are important to you?

May 14, 1998 - The last episode of Seinfeld is aired. It's a sad day in May for millions of Seinfeld fans and followers. 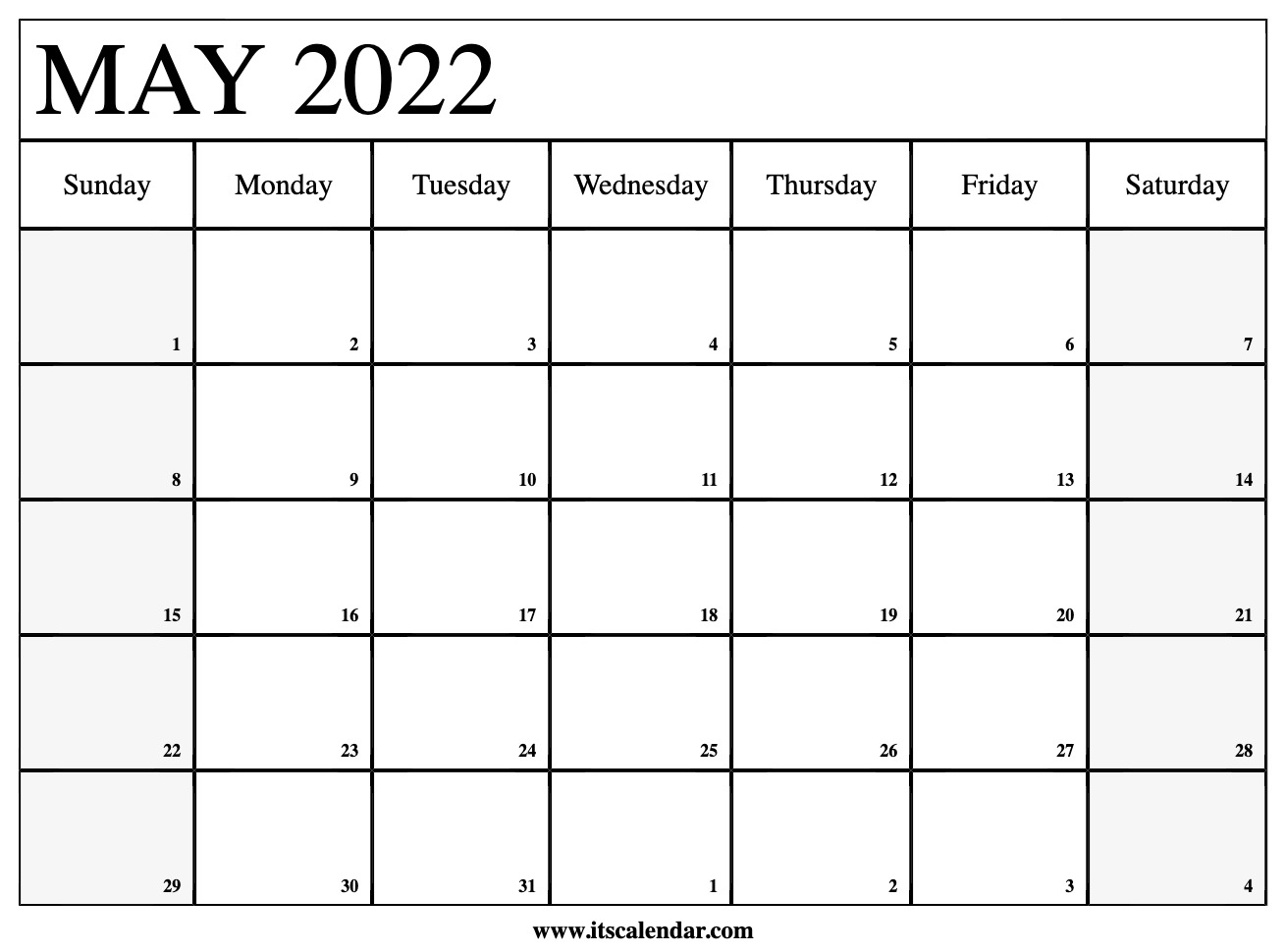 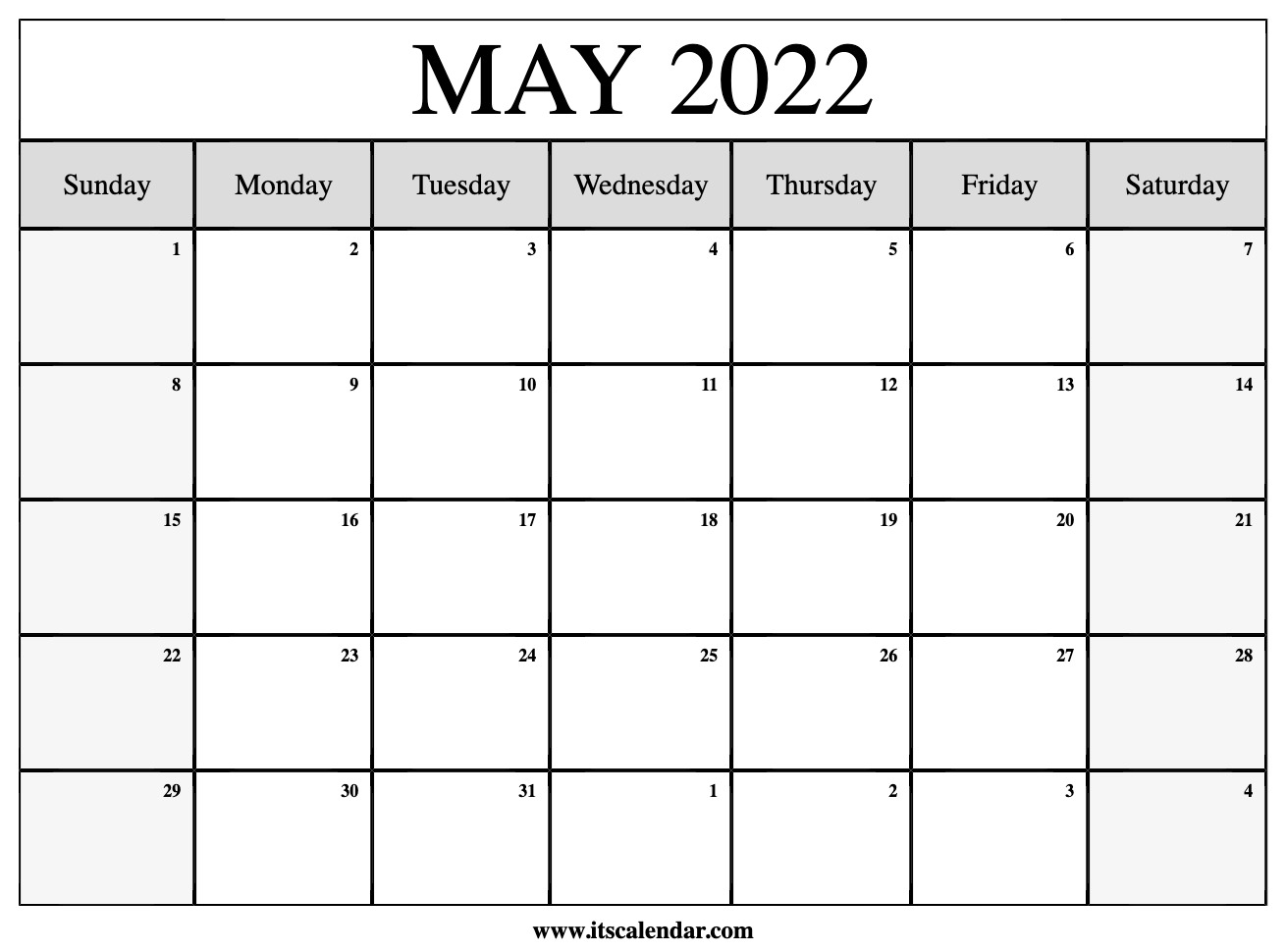 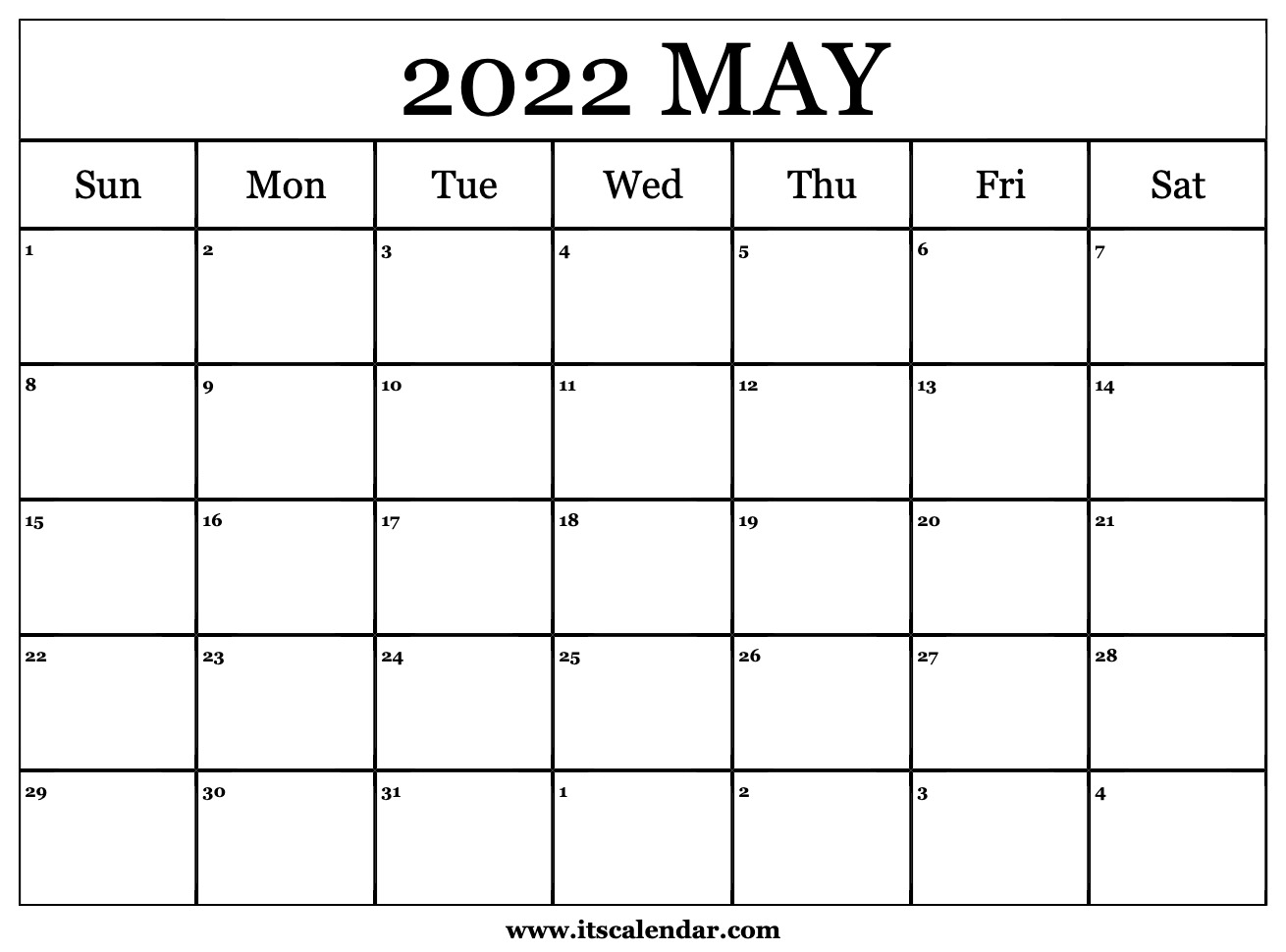 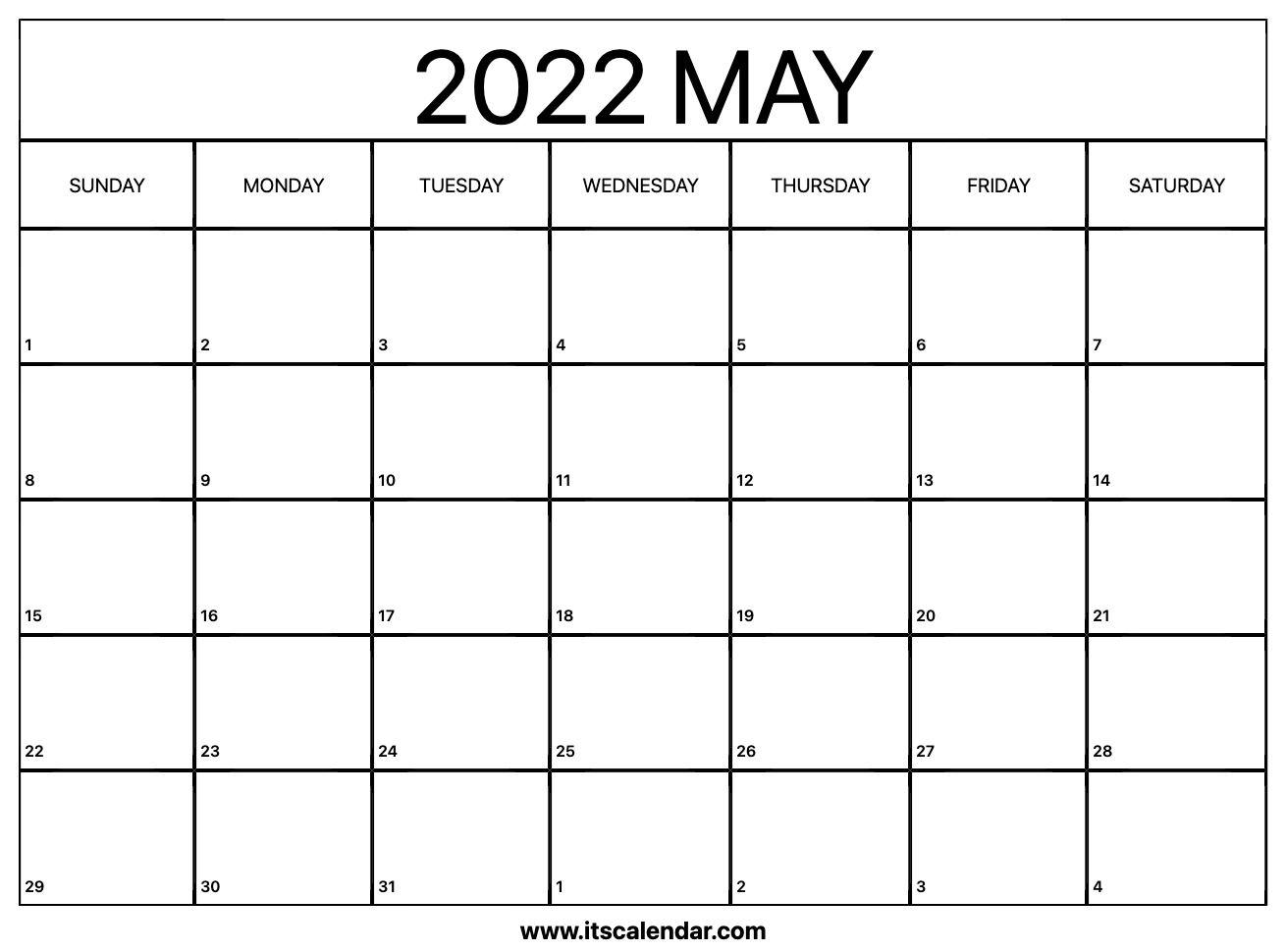